Every once in a while, a lock of Napoleon Bonaparte’s hair comes up for auction. Is it likely to be authentic? What does Napoleon’s hair look like? Where can one see a sample? And how much does it cost? Here are answers to your burning questions about Napoleon’s hair. 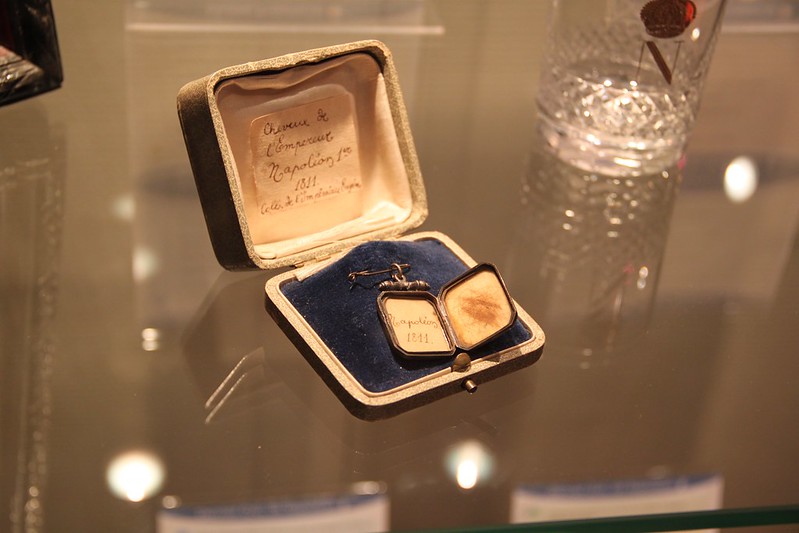 A lock of Napoleon’s hair on display in the Dernier Quartier-Général de Napoléon Museum next to the battlefield of Waterloo. Source: Henk Bekker, Flickr

What colour was Napoleon’s hair?

Napoleon’s hair was brown, although this question is not as easy to answer as one might think. Portraits are not necessarily a reliable guide (see “What did Napoleon look like?”) and first-hand descriptions of Napoleon’s hair colour contradict each other.

The son of General Würstemberger, who accompanied Napoleon in Switzerland in 1797, wrote that Napoleon’s “black, unpowdered hair hung down evenly over both shoulders in wide, lengthy tresses – oreilles de chien [dog’s ears], as one says – and was gathered into a rather flattened pigtail reaching to the middle of his narrow back.” (1)

However, Russian soldier Denis Davydov, who was with Tsar Alexander when he met Napoleon at Tilsit in 1807, reported that, “[t]he hair on his head was not black, but dark reddish-blond; his eyebrows and eyelashes were much darker than the colour of his hair….” (2) 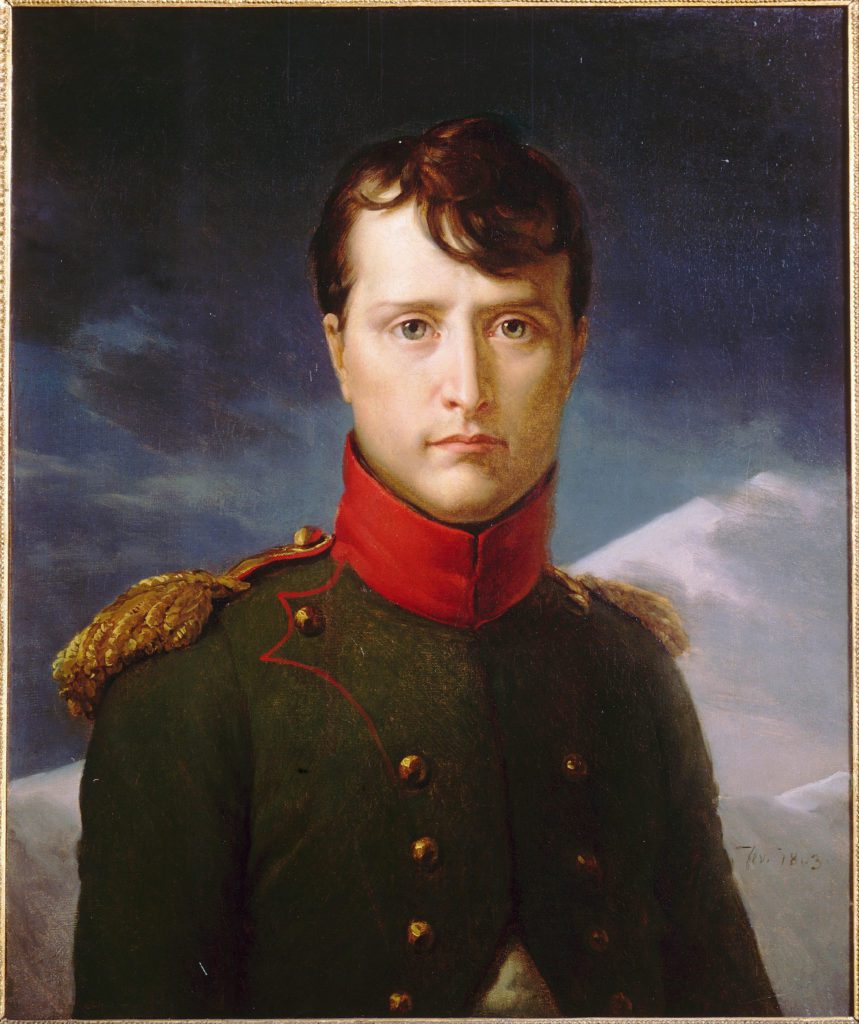 Such contradictions might be put down to differences in lighting, or to changes in Napoleon’s hair colour as he aged, but even people who were together on the ships ferrying Napoleon to permanent exile in 1815 did not agree on the precise shade of his hair.

Frederick Maitland, captain of the British frigate Bellerophon, which conveyed Napoleon from France to Plymouth Harbour, wrote: “His hair was of a very dark brown and though a little thin on top, had not a grey hair amongst it.” (3) Lieutenant John Bowerbank, on the same voyage, described Napoleon’s hair as “very black.” (4)

From the Bellerophon, Napoleon was transferred to HMS Northumberland for the voyage to St. Helena. Captain Charles Ross, commander of the Northumberland, mentioned Napoleon’s “rather thin, greasy-looking brown hair.” (5) William Henry Lyttleton, who obtained passage on the ship from Portsmouth to Plymouth, noted: “the top of his head was almost quite bald; his hair, of a reddish brown colour, was long, rough, and, if the expression may be permitted, dishevelled.” (6) John Glover, secretary to Rear Admiral Cockburn, referred to Napoleon’s “darkish-brown cropped hair, thin on the fore-part of the head.” (7) British surgeon William Warden wrote: “His forehead is thinly covered with dark hair, as well as the top of his head, which is large, and has a singular flatness: what hair he has behind is bushy, and I could not discern the slightest mixture of white in it.” (8)

Betsy Balcombe, the daughter of the East India Company official at whose home Napoleon stayed when he first arrived on St. Helena, became a good friend of Napoleon and had many opportunities to closely observe him. According to her, “his hair was dark brown, and as fine and silky as a child’s, rather too much so indeed for a man, as its very softness caused it to look thin.” (9)

Even French historians have not been entirely on the same page regarding the colour of Napoleon’s hair. Jules Michelet (1798-1874) described Napoleon’s hair as being “an uncertain brown, which in his youth seemed black in consequence of a free use of pomatum.” (10) Frédéric Masson (1847-1923) wrote:

The Emperor’s hair was not black but auburn. For the exact colour we must without doubt not depend upon those specimens which, having been preserved under glass have possibly lost their colour by exposure to light; but there are specimens which have been carefully wrapped up and have remained so since the time they were taken from his head. These tend almost to a dark flaxen…. (11)

The authoritative word on Napoleon’s hair colour should go to those who knew him best. Claude-François Méneval, Napoleon’s private secretary from 1802 to 1813, wrote:

His very fine chestnut hair, which, until the time of the expedition to Egypt, he had worn long, cut square and covering his ears, was clipped short. The hair was thin on the upper part of the head, and left bare his forehead…. (12)

Louis-Joseph Marchand, Napoleon’s first valet from 1814 to 1821, verifies this.

His head was large, covered with very fine chestnut hair, thin over the forehead but sufficient to form a characteristic curl; he shaved so as to have no whiskers. (13)

What was Napoleon’s hairstyle? 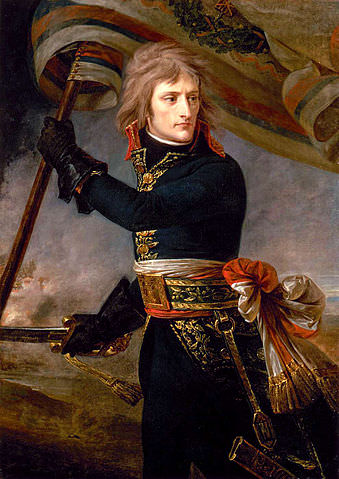 Flowing locks: Napoleon on the bridge at Arcola, by Antoine-Jean Gros, 1796

The historian Masson nicely summarized how Napoleon went from having long, flowing locks to a comb-over.

It was only at the end of the Consulate that he made up his mind to wear his hair quite short at the neck, and we may suppose that the reason must have been the very early baldness which is already foreshadowed in Gérard’s fine portrait of 1803. In Italy he wore his hair quite long, flowing over his temples, a few locks only tied up into a pigtail with a ribbon. The whole of his head was at that time slightly powdered. On coming back from Italy he gave up powder at Joséphine’s request; but he kept his hair long during the passage from Toulon to Alexandria. At Cairo, possibly even at the battle of the Pyramids, his hair was shorter. The hair on the temples has disappeared – all that light and floating veil which surrounded his face – and except at the back his hair is cut pretty close; but not so much as might be fancied – witness a series of busts executed on his return to France, from nature, which still show some long locks falling over the forehead, covering three-quarters of the ears, and encroaching considerably on the collar. At the same time the First Consul allowed his whiskers to grow as far as a third of the cheeks, which went down lower than the lobe of the ear, and appear to be pretty thick. These whiskers disappeared at the same time that the hair became shorter at the back; but it was only quite at the end of the Consulate that Bonaparte became ‘le Tondu’ (the shorn) as the soldiers called him. Gradually from that time the forehead became bare; so much so that in some of the unflattered sketches of the end of the Empire, we see that he brings the hair forward, and that the long lock which gives so lively a character to this face comes from a distance. (14) 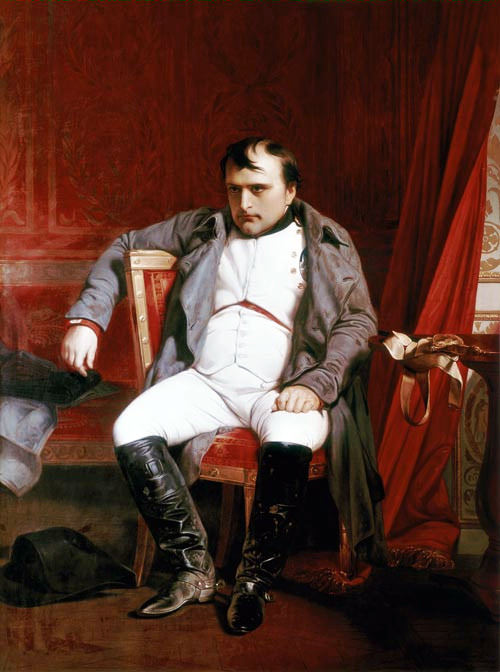 How much of Napoleon’s hair is still around?

During the period in which Napoleon lived, it was common to request and to give locks (pieces) of hair as a sign of affection or devotion, or as a way of remembering someone. These locks were often fashioned into jewelry.

[L]ocks of hair can have many meanings: commemoration of a person’s life, tokens of friendship or love, or tangible reminders of a life passed. Hair does not decompose, and because of this, many people cherished it as a symbol of eternal life. Families often passed down keepsakes of hair from generation to generation even after those touched by the person’s life were no longer living. (15)

Napoleon certainly gave people locks of his hair, particularly when he was on St. Helena. Betsy Balcombe wrote that when she and her family left the island in 1818, Napoleon asked her what she would like to have in remembrance of him.

I replied, I should value a lock of his hair more than any other gift he could present. He then sent for Monsieur Marchand, and desired him to bring in a pair of scissors and cut off four locks of hair for my father and mother, my sister, and myself, which he did. I still possess that lock of hair; it is all left me of the many tokens of remembrance of the Great Emperor. (16)

Because of Napoleon’s fame, even those who had never met him were eager to possess such tokens, as can be gathered from this letter that accompanied a piece of Napoleon’s hair that was sent to Sir Walter Scott in 1827.

I [R. Dalton] came by it in the following manner. My friend Captain Haviside was the bearer of certain presents from Mr. Elphinstone, a gentleman filling a high official situation in China, to the exiled Emperor, who had on some occasion shown either polite or humane attentions…to Mr. Elphinstone’s brother, an officer in the British army. On leaving these presents at St. Helena, Captain Haviside obtained a pass for Longwood, and went there for the express purpose of having an audience of the Emperor. He, the Emperor, was ill and could not receive him, but he was entertained by his suite, and Mme. Bertrand gave him a small quantity of the Emperor’s hair, which she had obtained from his valet a few days before. This quantity, small originally, has diminished hair by hair, to gratify the curiosity of the officers of the ship, until the portion I now send you was all that remained. (17)

In his will, Napoleon wrote:

Marchand shall preserve my hair, and cause a bracelet to be made of it, with a little gold clasp, to be sent to the Empress Maria Louisa, to my mother, and to each of my brothers, sisters, nephews, nieces, the Cardinal; and one of larger size for my son. (18)

When Napoleon died in 1821, his hair was cut off for this purpose. Members of his household also took pieces of hair as keepsakes. Although this means that there are locks of Napoleon’s hair in museums and private collections, the amount of hair that Napoleon gave away, plus what was removed upon his death, does not add up to the amount of hair that is claimed to be Napoleon’s.

There are very few authentic samples of Napoleon’s hair in existence…. There are many more samples in circulation whose authenticity is suspect, and many that are clearly fake. As the Comte Flahaut once famously remarked, he’d seen enough hair since Napoleon’s death to carpet the floors of Versailles. (19)

Where can one see locks of Napoleon’s hair?

Institutions that have Napoleon’s hair on display in their online collections include:

The Briars Park Homestead in Australia had a lock of Napoleon’s hair (from the pieces given to the Balcombe family), along with a ring and a locket containing Napoleon’s hair, in its collection. Sadly, these and other Napoleon artifacts were stolen in 2014.

What is Napoleon’s hair worth?

Yes, and arsenic was not the cause of Napoleon’s death. See “Hair analysis clears Napoleon’s ‘poisoners’” by Will Knight in the New Scientist, and “Hair Analysis Deflates Napoleon Poisoning Theories” by William J. Broad in the New York Times.

10 commments on “Napoleon’s Hair and its Many Locks”

As the Comte Flahaut once famously remarked, he’d seen enough hair since Napoleon’s death to carpet the floors of Versailles.