A commoner from Corsica who counted a famous French actor among her lovers, bathed in milk baths to which she was carried by a servant, and married a wealthy Italian prince could be said to have led a rather fortunate life. Pauline Bonaparte’s journey from rags to riches would not have been possible without her older brother Napoleon. Known for her beauty, impulsiveness and frivolity, Pauline loved Napoleon and was the least demanding of his siblings.

Pauline Bonaparte was born in Ajaccio, Corsica on October 20, 1780. The sixth child in the Bonaparte family, she was 11 years younger than Napoleon (see Napoleon’s family tree). Napoleon later said that he and Pauline had been the spoiled children of the family. Responsibility was not Pauline’s strong suit. She received no formal education and had zero intellectual leanings. Her interests were frivolous. She was a great flirt, and took enormous pride in her appearance, particularly her pale skin and lovely hands and feet (Napoleon, too, was proud of his delicately shaped hands).

Although Pauline wanted to marry someone else, Napoleon arranged for her to wed French officer Victoire Leclerc.

General Bonaparte was working in his room at Milan; Leclerc was on the staff and took advantage of a screen to express his love for Pauline in rather too unceremonious a fashion. General Bonaparte hears a noise, gets up and sees. The marriage was celebrated without losing a moment. (1)

Whether or not this is true, Pauline and Leclerc were married on June 14, 1797. They had a son, Dermide, on April 20, 1798. Napoleon named the boy after a hero in his favourite epic, Ossian.

In 1801, Napoleon appointed Leclerc Governor-General of Saint-Domingue (present-day Haiti) and sent him to put down a rebellion there. Pauline and Dermide went too. Though Pauline was not pleased about living so far from Europe, she made the best of it. She took numerous lovers and started a menagerie of native animals. But all in all, it was a miserable stay. The uprising continued. The French were struck with yellow fever. The entire family became ill, and Leclerc died on November 2, 1802. Pauline and Dermide returned to France with his remains.

Wanting to consolidate ties with French-occupied Italy, Napoleon found Pauline another husband in the form of Prince Camillo Borghese, a wealthy Roman nobleman who turned out to be as shallow and feckless as she was. They married on August 28, 1803. Pauline’s lack of seriousness, apparent disdain for her husband, and hints of infidelity did not go down well with the Romans. Napoleon wrote to her on April 6, 1804:

Madame and Dear Sister, – I have learned with pain that you have not the good sense to conform to the manners and customs of the city of Rome; that you show contempt for the inhabitants, and that your eyes are unceasingly turned towards Paris. Although occupied with vast affairs I nevertheless desire to make known my wishes, and I hope that you will conform to them.

Love your husband and his family, be amiable, accustom yourself to the usages of Rome, and put this in your head, that if you follow bad advice you will no longer be able to count upon me. You may be sure that you will find no support in Paris, and that I shall never receive you there without your husband. If you quarrel with him it will be your fault, and France will be closed to you. You will sacrifice your happiness and my esteem. (2)

Pauline’s health continued to trouble her. Borghese suggested that they visit the baths of Pisa. Pauline wanted to bring Dermide, but her husband advised against it. Instead the six-year-old stayed with Borghese’s brother. On August 14, 1804, in Pauline’s absence, the boy died of fever and convulsions. Pauline blamed Borghese for Dermide’s death. She wrote to Napoleon:

The blow has been so severe. Despite summoning all my courage, I find no strength to withstand it. My health is altered visibly and my husband is so alarmed he wants to take me to France, hoping that the change of air, and the pleasure of being near you, will be beneficial… Paris at this moment, where all is rejoicing, is not the place for a soul as sad as mine. In all other circumstances it would have been a great pleasure for me to witness your coronation, but fate pursues me in too cruel a manner to allow me such enjoyment. (3)

In the end Pauline attended Napoleon’s coronation, though she objected to having to hold the train of Josephine’s dress. She disliked both Josephine and Napoleon’s second wife, Marie Louise.

In 1806 Napoleon made Pauline Bonaparte Borghese the Princess and Duchess of Guastalla, in Italy. A wag said, “It is small, no doubt, but even a molehill is too much for the Princess Borghese to administer.” (4) Pauline soon sold the duchy to Parma for six million francs, keeping only the title of Princess.

Borghese commissioned a well-known statue of Pauline by the most famous Italian sculptor of the time, Antonio Canova. She decided to pose nude as Venus Victrix, thus appalling her husband. When someone asked whether she was uncomfortable being naked before the artist, Pauline replied, “Ah, but there was a fire in the room.” (5) 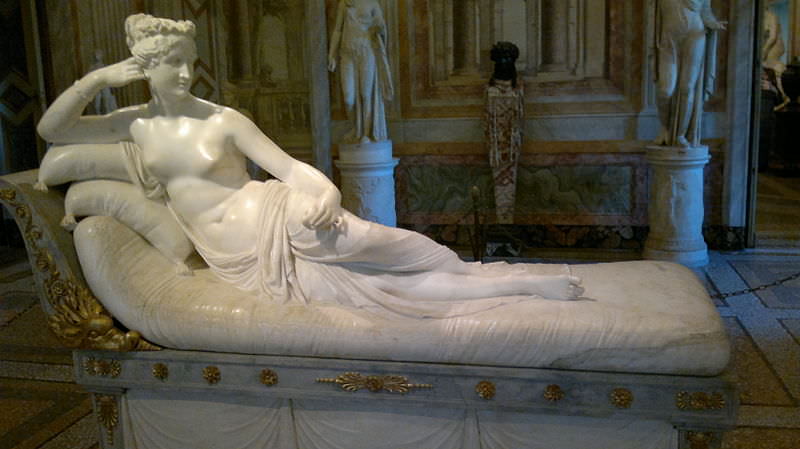 No more deportment than a schoolgirl, talking inconsequentially, laughing at nothing and at everything, she contradicted the most serious people and put out her tongue at her sister-in-law when Josephine wasn’t looking. She nudged my knee when I didn’t pay enough attention to her rattling on and attracted to herself from time to time those ferocious glances with which her brother recalled the most intractable men to order…. [S]he had no principles and was likely to do the right thing only by caprice. (6)

Clemens von Metternich, who got to know Pauline Bonaparte when he was Austria’s ambassador to Paris, wrote:

Pauline was as handsome as it is possible to be; she was in love with herself, and her only occupation was pleasure. Of amiable character and extreme good-nature, Napoleon entertained a different sentiment for her from that with which he regarded the rest of his family. ‘Pauline,’ he has often told me, ‘Pauline never asks me for anything.’ The Princess Borghese, on her side, used to say, ‘I do not care for crowns; if I had wished for one, I should have had it; but I left that taste to my relations.’ She had a veneration for Napoleon which almost amounted to worship. (7)

‘[S]he has as much grace as beauty and is a perfect nymph in size and figure.’ Caroline replied, ‘A nymph, but not quite a vestal?’  ‘Good heaven! Madam,’  returned du Cayla, ‘the world is very wicked: the Princess Pauline has too much merit not to have adorers. She may have distinguished, perhaps, two or three, and twenty or thirty are charged upon her.’  (8)

With Napoleon in exile

Pauline Bonaparte did not have a happy marriage, but – like her brother Louis – she stayed in it at Napoleon’s insistence. Prince Borghese’s wealth and title came in handy. Though the two remained married, they lived separately. When Napoleon was exiled to Elba in 1814, Pauline liquidated her assets and joined him there. She was the only one of Napoleon’s siblings to do so. Pauline became the life and soul of Napoleon’s entourage and generously helped him meet his expenses. Napoleon’s valet Louis Étienne Saint-Denis wrote of Pauline on Elba:

Her person, from what could be seen, had all the beautiful proportions of the Venus di Medici. Nothing was lacking to her but a little youth, for the skin of her face was beginning to be wrinkled, but the few defects which resulted from age disappeared under a slight coating of cosmetic which gave more animation to her pretty features. Her eyes were charming and very lively, her teeth were admirable, and her hands and feet were of the most perfect model. She always dressed most carefully, and in the style of a young girl of eighteen. She always said that she was ill, out of sorts; when she had to go up or down stairs she had herself carried on a square of red velvet having a stick with handles on each side, and yet if she was at a ball she danced like a woman who enjoys very good health. She dined with the Emperor and he liked to tease and poke fun at her. One evening she was so angry with what the Emperor had said to her that she rose from table and went away with tears in her eyes. The irritation did not last long, for the Emperor went up to see her that evening or the next morning and the little feeling of annoyance quickly disappeared. (9)

Although Pauline wanted to join Napoleon in France for his “Hundred Days” return to power in 1815, she was detained by the Austrians in Italy. After Napoleon’s defeat at the Battle of Waterloo and subsequent exile to St. Helena, Pauline moved to Rome. This is where we find her in Napoleon in America, along with her mother Letizia, her brothers Louis and Lucien, and her uncle Joseph Fesch. She had an apartment in the Palazzo Borghese. She also acquired a villa, dubbed the Villa Paolina (Paulina), which is now the French Embassy to the Holy See. She had the building and gardens extensively renovated. The Villa became renowned for Pauline’s hospitality, taste and splendour. She received many distinguished visitors and every week played hostess to a spectacular ball, concert, soiree or play.

In 1820, Elizabeth Patterson Bonaparte (the American ex-wife of Napoleon’s youngest brother, Jerome) wrote to her father regarding Pauline.

She is about thirty-seven years of age, the handsomest woman in Europe of her age, excessively luxurious, consequently expensive in her habits, said to be extremely capricious in her attachments… [S]he occupies a superb palace, receives the homage of all strangers of distinction: pleasure is the sole pursuit in Italy. Her modes of existence are magnificent, although capricious and spoiled by adulation, which in a beautiful woman and a princess is very natural. They say she is good au fond. (10)

Pauline continued to succumb to bouts of ill health. She also fretted about Napoleon and hoped to secure his release or to join him in exile. On July 11, 1821, she wrote to British Prime Minister Lord Liverpool:

The disease to which [Napoleon] is a victim is fatal at St. Helena, and it is in the name of all the members of the Emperor’s family that I demand of the English Government a change of climate for him. If so reasonable a request is met with a refusal it will be equivalent to passing a death sentence, and in this case I ask leave to set out for St. Helena, to go and rejoin the Emperor, in order to minister to him in his last moments. (11)

News had not yet reached Rome that Napoleon had died on May 5th.

Pauline’s health worsened. In 1824, she prevailed upon the Pope to help her reconcile with Borghese, who had been living in Florence with a mistress. She spent her final months with her husband, dying on June 9, 1825, at the age of 44. The cause of death was given as a tumor on the stomach. Pauline Bonaparte Borghese is buried at the Basilica of Santa Maria Maggiore in Rome.

28 commments on “How Pauline Bonaparte Lived for Pleasure”

Pauline was as handsome as it is possible to be; she was in love with herself, and her only occupation was pleasure.