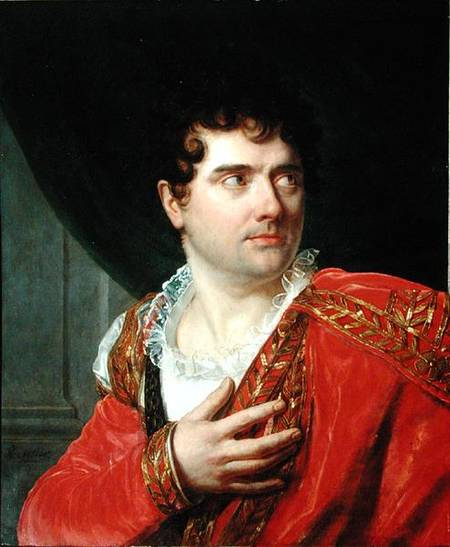 Napoleon’s favourite actor was François-Joseph Talma, the leading French tragedian of the period. They became friends before Napoleon became Emperor. Napoleon maintained a close relationship with Talma during his years in power and Talma remained a loyal friend.

Napoleon and the theatre

Napoleon was an avid theatre-goer. During the 15 years he governed France, he saw 374 plays, some more than once, making a total of 682 visits to the theatre. (1) Napoleon became a strong supporter of the former royal theatre in Paris, the Comédie-Française, which he re-established in 1803 as the Théâtre-Français. He commissioned plays and provided money to actors.

The higher walk of tragedy is the school of great men; it is the duty of sovereigns to encourage and disseminate a taste for it. Nor it is necessary to be a poet, to be enabled to judge of the merits of a tragedy; it is sufficient to be acquainted with men and things, to possess an elevated mind, and to be a statesman…. Tragedy fires the soul, elevates the heart, and is calculated to generate heroes. In this respect, perhaps, France owes to [17th-century French dramatist Pierre] Corneille a part of her great actions…. [H]ad he lived in my time, I would have made him a prince. (2)

In addition to his personal enjoyment of the theatre, Napoleon recognized its political value. Live theatre was one of the main sources of public entertainment. By supporting and attending theatres, he was able to portray himself as a cultured patron of the arts. He could soften his image by allowing people to observe his reactions to the plays. He could also monitor his popularity by seeing how the audience responded to his arrival at each performance. He would deliberately turn up late so he could gauge the welcome of the crowd.

Napoleon also used the theatre as an instrument of propaganda and control. Imperial decrees in 1806 and 1807 reduced the number of theatres in Paris – which had risen to over 50 after the French Revolution – to eight, specified what type of production could be staged at each (e.g., tragedy, comedy, opera), and required them to seek permission for each play they wanted to perform. Theatres outside of Paris were similarly reduced and regulated, as were travelling theatre companies.

In order for a play to be approved, all plots and characters had to be mythological or historical, the idea being that focus on these stories would prevent regressing to the contemporary focus on revolutionary works. Automatically banned by censors was any play whose plot was taken from the Bible, referred to Napoleon himself (after 1810), as well as ‘all plays referring to the Bourbons…usurpation of a throne, punishment of a tyrant, or victory over France.’ (3)

Theatre companies and censors went through plays line-by-line to change or remove anything that might offend Imperial sensibilities. Performances were monitored by police agents. If there was any heckling or applause that could be construed as anti-regime, the play was banned. 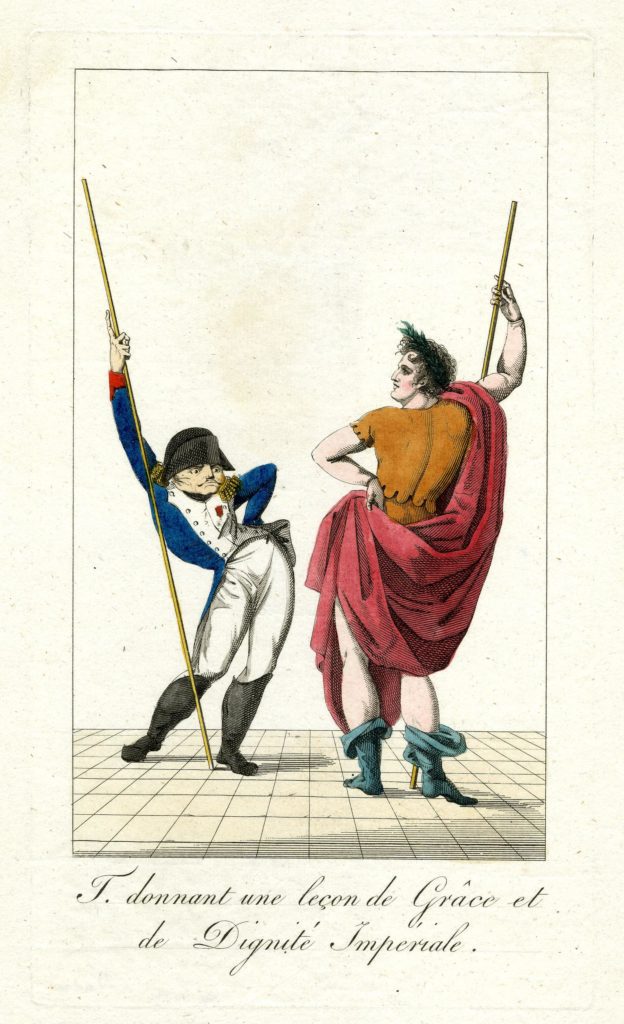 Caricature of Talma instructing Napoleon how to pose like an emperor. © The Trustees of the British Museum

Even as Napoleon tightened his control over French theatre, he continued to maintain good relations with the biggest theatrical star of the day: François-Joseph Talma. Talma was born in Paris on January 15, 1763. His father, a successful dentist, was persuaded by a grateful patient to move the family to London, where Talma received a good education. Pressured by his father, Talma briefly practiced dentistry, but his real love was the theatre. He began by performing in amateur plays. In 1787, he made his professional debut at the Comédie-Française as Séide in Voltaire’s Mahomet. He played minor characters until November 1789, when he assumed the title role in an anti-monarchist play called Charles IX. François-Joseph Talma established the practice of appearing in historically accurate costuming and sets, rather than the clothes and scenery of the day (see my article on Coiffure à la Titus). He also introduced a more natural style of acting, reciting lines without unnecessary exaggeration.

The French Revolution and its aftermath led to dissension within the Comédie-Française. In 1791 Talma, a republican, left to form a rival theatre troupe. That same year he married Louise-Julie Carreau, a dancer at the Paris Opera, who ran an influential artistic and literary salon. Twelve days after the wedding Julie gave birth to their twin sons (she already had three sons by three different men). Talma had amassed a significant amount of debt, which Julie – who had some wealth from real estate speculation – took on. They separated in 1795 after Talma started an affair with another actress, Charlotte Vanhove, whom he later married.

To make ends meet, Julie had to rent out her house at Number 6, Rue Chantereine in Paris. She found a willing tenant in Marie-Joseph-Rose de Tascher de la Pagerie, otherwise known as Josephine, who married Napoleon Bonaparte at the house on March 9, 1796. In 1798, Julie sold the house to Napoleon.

By this time Talma and Napoleon were already friends. As a leading French actor, Talma was better known than the young general, and better off. Napoleon accepted free admissions to the theatre from Talma and even borrowed money from him. According to one account of their early days together:

[O]ne of the principal amusements of the two friends, together with that of a third person, a Mr. Le Noire, was the relation of stories of ghosts and old castles, into which (the candles being extinguished) the future conqueror of Europe entered with all his heart, and was seriously offended when his companions interrupted him by tripping up his chair, shaking the table, or any other practical pleasantry. (4)

Napoleon greatly admired Talma’s acting and did not forget his friend as he rose to become First Consul and then Emperor of the French. The two often dined and visited together. It was rumoured that Napoleon took lessons in deportment from Talma. In addition to his performances at the Théâtre-Français, Talma performed at Napoleon’s palaces. He directed members of Napoleon’s family and household staff in plays at Josephine’s residence Malmaison. Talma had an affair with Napoleon’s sister Pauline. Napoleon also sent Talma to perform for foreign leaders.

In 1808, Napoleon brought François-Joseph Talma, along with other members of the Comédie-Français, to the Congress of Erfurt in Germany to entertain and impress Tsar Alexander of Russia. When Talma delivered the line, “L’amitié d’un grand homme est un beinfait des Dieux,” [the friendship of a great man is a blessing from the Gods] Alexander reportedly rose in the theatre and embraced Napoleon. (5)

Talma was handsomely rewarded for his efforts. Between 1806 and 1813, Napoleon gave Talma a series of payments totalling 195,200 francs. (6)

Napoleon did not hesitate to advise Talma on how to act, as illustrated by this anecdote recounted by Napoleon’s valet Saint-Denis.

One day…at breakfast, the Emperor received Talma, who had been announced. It was the day after a performance of ‘Tippoo Saïb,’ at which His Majesty had been present. The Emperor made a number of critical observations on the piece to the great tragedian, and told him to communicate them to the author. He even gave the plan of a scene, and showed Talma what gesture Tippoo ought to make and what attitude he ought to take as he rose from his throne to go to fight the English, I think. And the better to impress on the actor the action and the language of the sovereign of Mysore, the Emperor sat down in a chair and rose from it with a most expressive gesture, full of nobility and resolution, speaking a few words suitable to the situation. (7)

During Napoleon’s exile on Elba, Talma performed for King Louis XVIII, something for which Napoleon forgave his friend. John Cam Hobhouse saw Napoleon at the Théâtre-Français after the latter’s return from Elba in 1815.

The house was choked with spectators, who crowded into the orchestra. The play was Hector. … Napoleon entered at the third scene. The whole mass rose with a shout which still thunders in my ears. The vives continued till the Emperor, after bowing to the right and left, had seated himself, and the play was recommenced. The audience received every speech which had the least reference to their returned hero with unnumbered plaudits. … Napoleon was very attentive; whilst I saw him he spoke to none of those who stood behind him, nor returned the compliments of the audience: he withdrew suddenly at the end of the play, without any notice or obeisance, so that the multitude had hardly time to salute him with a short shout….

Talma played Hector in his usual powerful style…I cannot forbear adding a story I heard from him… At the first meeting between the Emperor and actor since the return from Elba, the former, addressing him with his usual familiarity, said, ‘so Talma, Chateaubriand says that you gave me lessons how to act the Emperor; I take his hint as a compliment, for it shows I must at least have played my part well.’ (8)

After Napoleon’s defeat at the Battle of Waterloo and subsequent abdication, Talma went to Malmaison in disguise to bid the Emperor farewell.

Talma continued to perform under the restored Louis XVIII, who also thought highly of him and treated him well. His last performance was in Charles VI on June 3, 1826. François-Joseph Talma died in Paris on October 19, 1826, at the age of 63.

Napoleon showed Talma what gesture Tippoo ought to make and what attitude he ought to take as he rose from his throne to go to fight the English.