Though French Emperor Napoleon Bonaparte had no musical talent (see 10 Interesting Facts about Napoleon), he thoroughly enjoyed music. Napoleon valued music both for the pleasure it gave him, and because it could serve political ends. He wrote:

Among all the fine arts, music is the one which exercises the greatest influence upon the passions, and is the one which the legislator should most encourage. A musical composition created by a master-hand makes an unfailing appeal to the feelings, and exerts a far greater influence than a good work on morals, which convinces our reason without affecting our habits. (1) 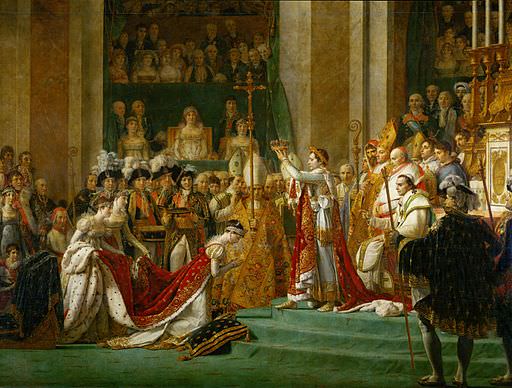 Detail from the Coronation of Napoleon by Jacques-Louis David. Napoleon’s favourite composer Giovanni Paisiello wrote a mass and Te Deum for the occasion.

[Napoleon] was passionately fond of music, especially of Italian music; and like all great amateurs he was very hard to please. He would like to have sung himself if he could, but he had no ear whatever, yet this did not prevent him from occasionally humming snatches of melodies which had impressed him. It was usually in the morning that these reminiscences came to him, and he treated me to such tunes while he was being dressed. The air that I most frequently heard him murder was the “Marseillaise.” The Emperor used also to whistle at times, though not loudly. The air of “Malbrook” [Marlbrough s’en va-t-en guerre] if whistled by His Majesty was for me a sure sign that the army would soon leave for the front. I remember that he never whistled so much, nor seemed so gay, as at the moment of starting on the Russian campaign. (2)

When he grew weary of reading poetry, he would begin to sing loudly, but out of tune. When nothing vexed him, or when he was satisfied with the subject of his meditations, his choice of songs reflected it. It would be the airs of Devin de village or other old operas.  One of his favorite melodies had for its subject a young girl whose lover cures her of the bite of a winged insect…. It ended with the line: ‘Un baiser de sa bouche en fut le médecin.’

When he was in a more serious mood, he would sing verses of hymns or of revolutionary cantatas, such as the Chant du départ, Veillons au salut de l’empire; or he would warble the two lines: ‘Qui veut asservir l’univers / Doit commencer par sa patrie!’ (He who would subdue the universe / Should begin with his own country.) (3)

When Napoleon was in exile on St. Helena, his young friend Betsy Balcombe played and sang “Ye banks and braes” for him.

When I finished, he said it was the prettiest English air he had ever heard. I replied it was a Scottish ballad, not English; and he remarked, he thought it too pretty to be English: ‘their music is vile—the worst in the world. …. He expressed a great dislike to French music, which, he said, was almost as bad as the English, and that the Italians were the only people who could produce an opera. (4)

The music of Paisiello When it came to opera, Napoleon’s favourite composer was the Italian Giovanni Paisiello (1740-1816). In Napoleon in America, Napoleon attends a concert in New Orleans that features Paisiello’s music. In Napoleon’s own novella Clisson et Eugénie (1795), the autobiographical main character says of his beloved:

Eugénie was like a piece by Paisiello; only those with souls attuned to his music are transported by it. The common people remain untouched. (5)

When Paisiello – then chapel master for Ferdinand IV, the King of the Two Sicilies – composed music for the funeral of General Hoche in 1797, Napoleon called him the greatest of contemporary composers. (6) In 1801, Napoleon invited Paisiello to Paris to compose and conduct music for his private orchestra. The 71-year-old was reluctant to leave Naples, but Ferdinand persuaded him to go in the interests of improving Franco-Neapolitan relations. Though Napoleon was pleased, Paisiello’s first French opera, Proserpine, did not please Parisians. Under the pretext that the climate did not suit his wife, Paisiello asked for permission to return to Naples in 1803. There he served as chapel master for Napoleon’s brother Joseph when he was King of Naples, and for Joseph’s successor, Joachim Murat, husband of Napoleon’s sister Caroline.

Paisiello composed the mass and Te deum for Napoleon’s 1804 coronation. He wrote numerous religious works for Napoleon’s and Joseph’s chapels. Every year he sent Napoleon a sacred composition for his birthday. He also presented Archduchess Marie Louise of Austria with a song on the occasion of her marriage to Napoleon in 1810.

According to Paisiello, the Emperor liked his music “because it did not prevent his thinking of other things.” (8)

To listen to the kind of music that Napoleon’s soldiers would have heard, visit David Ebsworth’s website. To hear music from Napoleon’s 100 Days (his brief return to the throne after escaping from Elba in 1815), see the University of Warwick’s website. The Napoleon Series website offers a list of Napoleonic and French Revolutionary music available on recordings.

8 commments on “What was Napoleon’s favourite music?”

He expressed a great dislike to French music, which, he said, was almost as bad as the English, and that the Italians were the only people who could produce an opera.