Napoleon Bonaparte died at 5:49 p.m. on May 5, 1821 on St. Helena, an isolated island in the South Atlantic. Given the number of people surrounding the fallen Emperor during his final days, there should be a clear record of Napoleon’s last words. But, as with most things involving Napoleon, there are several accounts of his dying hours and differences regarding what he actually said. 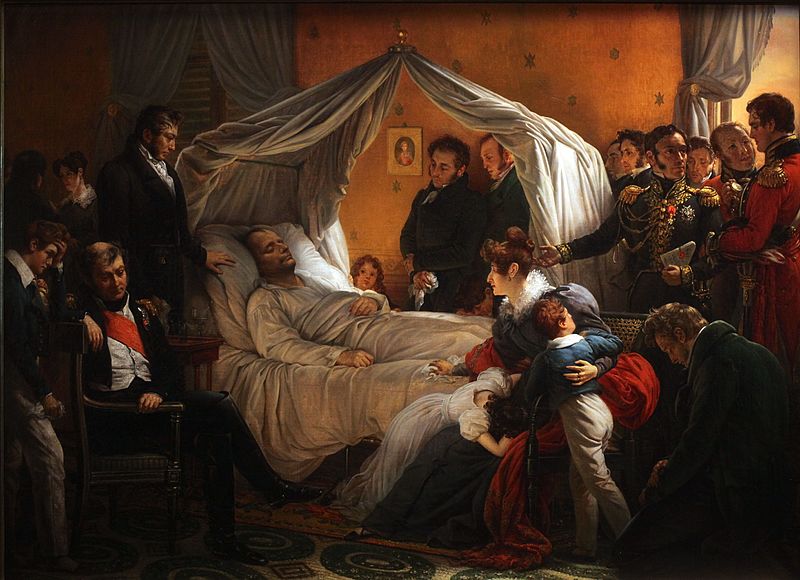 The Death of Napoleon by Charles de Steuben

What the witnesses said

The Emperor had been in bed for forty-odd days, and we who had been constantly with him, waiting on him, were so tired, and needed rest so much, that we could not control our sleepiness. The quiet of the apartment favored it. All of us, whether on chairs or sofas, took some instants of rest. If we woke up, we hurried to the bed, we listened attentively to hear the breath, and we poured into the Emperor’s mouth, which was a little open, a spoonful or two of sugar and water to refresh him. We would examine the sick man’s face as well as we could by the reflection of the light hidden behind the screen which was before the door of the dining room. It was in this way that the night passed. (1)

Saint-Denis does not give us Napoleon’s last words. All he says on the matter is that Napoleon “could only speak a few words, and with difficulty.” (2)

Napoleon’s Grand Marshal, General Henri Bertrand, did hear some last words early in the morning of May 5th.

From three o’clock until half-past four there were hiccups and stifled groans. Then afterwards he moaned and yawned. He appeared to be in great pain. He uttered several words which could not be distinguished and then said ‘Who retreats’ or definitely: ‘At the head of the Army.’ (3)

Napoleon’s doctor Francesco Antommarchi confirms a couple of these.

The clock struck half-past five [in the morning], and Napoleon was still delirious, speaking with difficulty, and uttering words broken and inarticulate; amongst others, we heard the words, ‘Head…army,’ and these were the last he pronounced; for they had no sooner passed his lips than he lost the power of speech. (4)

The hiccups that had appeared at intervals became much more frequent, and delirium set in; the Emperor pronounced a lot of inarticulate words that were translated ‘France,… my son,… The army…’ One can conclude with absolute certainty that his last preoccupation, his last thoughts were for France, his son, and the army. These were the last words we were to hear. (5)

The night was very bad: towards two o’clock delirium became evident, and was accompanied by nervous contractions. Twice I thought I distinguished the unconnected words, France – armée, tête d’armée – Josephine…. (6)

In assessing these accounts, we have to consider the reliability of the witnesses, when their accounts were written (i.e., around the time of Napoleon’s death or much later), and their motives for publishing them. For a discussion of the validity of the various Napoleonic memoirs, see “The Truth About Memoires” by Max Sewell on The Napoleon Series website. In general, Bertrand’s and Marchand’s memoirs are considered much more credible than those of Antommarchi and Montholon.

Why might Napoleon’s attendants have doctored his last words?

Napoleon had always been a master of propaganda, and he spent his last years consciously crafting how he would be remembered by posterity. Those around him were well aware of that. They wanted to perpetuate that image. They may also have wanted to promote their own interests.

In light of the above, we can come to some conclusions.

Marchand includes “my son” among Napoleon’s last words. Marchand was devoted to Napoleon. He knew that the Emperor would have wanted his final words to be consistent with his image – one of dedication to France and the army. He was also acutely conscious of Napoleon’s love for his son, the King of Rome, to whom Marchand’s mother had been a nurse (see my post about Napoleon’s son). Marchand was undoubtedly straining to hear the boy mentioned in Napoleon’s last words, sure that the child was, as he says, among the Emperor’s last preoccupations. Bertrand confirms this by writing (probably after talking to Marchand):

During the night [of May 4] the Emperor had spoken the name of his son before saying ‘A la tête de l’Armée.’ The day before he had twice asked, ‘Comment s’appelle mon fils?’ [What is my son’s name?] and Marchand had replied, ‘Napoléon.’ (7)

Here is a picture to sum this all up. In Napoleon in America, Napoleon fictionally avoids death by escaping from St. Helena and landing in New Orleans on May 5, 1821, where he embarks on new adventures.

How was Napoleon’s death reported in the newspapers?

18 commments on “What were Napoleon’s last words?”

From three o’clock until half-past four there were hiccups and stifled groans. Then afterwards he moaned and yawned. He appeared to be in great pain. He uttered several words which could not be distinguished and then said ‘Who retreats’ or definitely: ‘At the head of the Army.’