Napoleon Bonaparte did not say, “Able was I ere I saw Elba,” although the phrase is often attributed to him. This well-known palindrome – a word or phrase that reads the same backward and forward – first appeared in 1848, 27 years after Napoleon’s death. Someone named “J.T.R.” came up with the Elba line, along with “Snug & raw was I ere I saw war & guns.” (1) 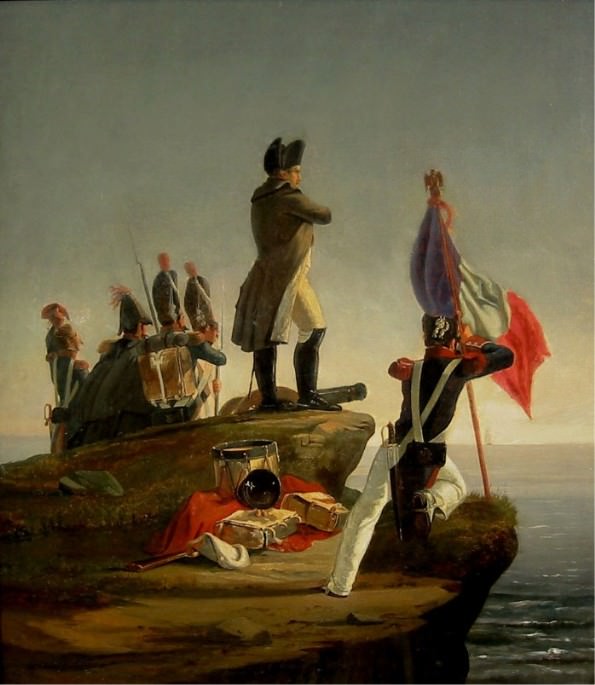 Napoleon on Elba by Horace Vernet

According to a periodical published in 1821, the year Napoleon died, there was at the time only one known palindrome phrase in English. Even that was “only procured by a quaintness of spelling in one word, and the substitution of a figure for another: Lewd did I live, & evil I did dwel.” (2)

Anagrams were more common. These are words or phrases formed by rearranging the letters of another word or phrase. In centuries past, anagrams were sometimes thought to have mystical significance. By the 19th century, they were primarily a form of word play. As folklorist H.B. Wheatley wrote, “though anagrams and all kinds of play upon words are in themselves trivial, there is no doubt that, on the presumption of recreation being necessary in a life of toil, the mind will at times find amusement and delight in trifles….” (3)

Georgians and Victorians particularly enjoyed cognate anagrams, in which the anagram is related in some way to the original word or phrase.

A number of anagrams were made from well-known names of the Napoleonic Wars.

Field Marshal the Duke – The Duke shall arm the field

His Grace the Duke of Wellington – Well fought, K[night]! No disgrace in thee

Horatio Nelson – Honor est a Nilo (Honour is from the Nile)

Patriotism – O, ’tis a Mr. Pit (William Pitt the Younger was a British Prime Minister during the Napoleonic Wars)

“If we take the letters of the word veto (which was the precursor of the revolution) from La Revolution Française, we shall find that the remaining letters, when transposed, will form the sentence Un corse la finira.” (A Corsican will end it)

Astronomers – Moon-starers, or no more stars

Catalogues – Got as a clue

Determination – I mean to rend it

Matrimony – Into my arm

Misanthrope – Spare him not

Penitentiary – Nay, I repent it

Sweetheart – There we sat

Napoleon wasn’t much given to word play, though he did enjoy naming Claude Victor Perrin (“beau soleil”) the Duke of Belluno. One of Napoleon’s companions in exile on St. Helena related the following anecdote.

It was stated by one of our people that the owner of one of the houses…on the island…said, ‘It is reported that you complain up yonder and consider yourselves unhappy (he spoke of Longwood), but we are at a loss to make it out; for it is said that you have beef every day, while we cannot get it but three or four times a year, and even then we pay for it at the rate of fifteen or twenty pence a pound.’ The Emperor, who laughed heartily…observed, ‘You ought to have assured him that it cost us several crowns.’ Crowns in English, and in several languages of the continent, means also a piece of money.

I observed latterly that it was the only pun I had till then heard from the Emperor’s mouth, but the person to whom I made the remark said he had heard of his having made a similar one, and on the same subject in the isle of Elba. A mason employed in some buildings which were to be constructed by the Emperor’s order had fallen and hurt himself; the Emperor wishing to encourage him assured him that it would be of no consequence. ‘I have had,’ said he, ‘a much worse fall than yours; but look at me, I am on my legs, and in good health.’ (6)

This resilience stands him in good stead in Napoleon in America.

How the 20 Questions Game came to America

18 commments on “Able was I ere I saw Elba: 19th-Century Palindromes & Anagrams”

[T]hough anagrams and all kinds of play upon words are in themselves trivial, there is no doubt that, on the presumption of recreation being necessary in a life of toil, the mind will at times find amusement and delight in trifles.