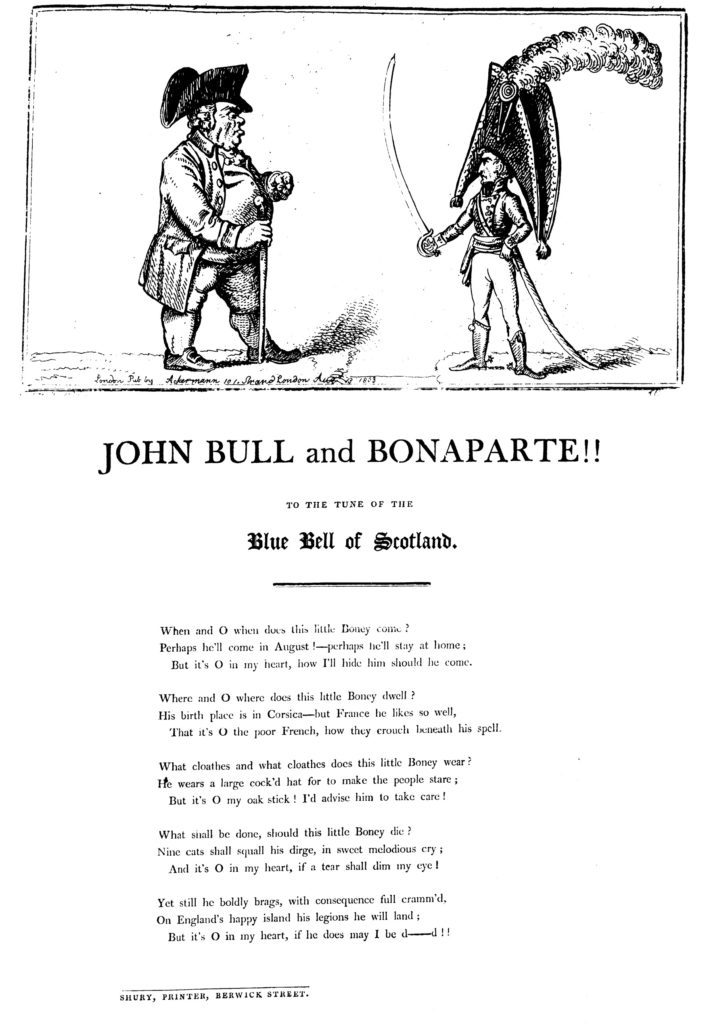 John Bull and Bonaparte, one of many songs about Napoleon written during the Napoleonic Wars. Source: Broadside Ballads Online from the Bodleian Libraries http://ballads.bodleian.ox.ac.uk/

The Napoleonic Wars had an enormous influence on cultural life in Great Britain. According to Scottish folk song collector Gavin Greig, “the twenty years that ended with Waterloo have left more traces on our popular minstrelsy than any other period of our history has done.” (1) Popular song was “the most widespread and influential form of literary and musical expression” in Britain at the time, and Napoleon was a common subject matter.

Never were so many melodies, verses and choruses expended in praise, condemnation, pity and ridicule as in the case of Napoleon. (2)

Many songs about Napoleon were printed cheaply as texts on broadside ballad sheets.

Sold in large numbers on street-corners, in town-squares and at fairs by travelling ballad-singers and pinned on the walls of alehouses and other public places, [broadside ballads] were sung, read and viewed with pleasure by a wide audience, but have been handed down to us in only small numbers. (3)

Ballad singers sang on the streets or in pubs in exchange for pennies. Performances were often a cappella, with lyrics and tunes varying from one appearance to another.

As in British caricatures of the time, Napoleon was often portrayed in an unflattering manner: “little Boney,” “the Corsican monster,” “the Corsican pest,” etc. During 1803-1805, when Napoleon was threatening to invade Britain, songs formed part of a propaganda campaign aimed at arousing British patriotism and getting more men to enlist in the army and the navy.

In later songs, particularly those written after Napoleon’s 1815 defeat and exile to St. Helena, Napoleon is regarded more favourably: “that hero bold,” “brave Napoleon,” “Bonaparte, the Frenchman’s pride.” These songs tend to focus on Napoleon as a man, rather than as an enemy leader.

[B]y envisaging a noble husband permanently separated from his family, people could articulate and indeed ennoble their own grief for lost servicemen, or – more happily – valorise the less permanent sacrifices and hardships endured whilst husbands or lovers served on foreign stations. In these songs, Napoleon is always the individual, his opponents the state apparatus, this in itself securing him sympathy among much of the populace. (4)

Some songs about Napoleon became truly popular and were passed down through the generations. These were written down by folk song collectors in the late 19th and early 20th centuries. Henry Burstow, a Sussex shoemaker and bell ringer who was born in 1826 and died in 1916, claimed he knew 420 songs, at least seven of which were about Napoleon (Boney’s Farewell to Paris, Boney in St. Helena, Boney’s Lamentation, Bonny Bunch of Roses, Deeds of Napoleon, Dream of Napoleon, The Grand Conversation of Napoleon).

Here is a selection of songs about Napoleon written during his lifetime, with a sample of the lyrics. For the full text, click on the song title, which will take you to the relevant broadside sheet in Broadside Ballads Online from the Bodleian Libraries. To listen to the songs, go to Soundcloud, where Oskar Cox Jensen, the author of Napoleon and British Song, 1797-1822 (2015), has posted recordings of several of the songs listed below, as well as other songs about Napoleon. You can also listen to the first verses of several Napoleonic ballads, and many other broadside ballads, by following the “Free First Verse Recordings” link on traditional folksinger Dick Holdstock’s website. Dick is the author of the excellent Again With One Voice, British Songs of Political Reform, 1768 to 1868 (2021).

When and O when does this little Boney come?
Perhaps he’ll come in August! Perhaps he’ll stay at home;
But it’s O in my heart, how I’ll hide him should he come.

That is “hide” in the sense of hitting with a stick.

High on a rock, his cunning eye
Surveys half Europe at a glance,
Fat Holland, fertile Italy,
Old Spain, and gay regen’rate France.

O dear, Little Boney’s coming over;
With his legions of troops to land them at Dover:
But our brave Volunteers they’ll soon do him over,
And blow him quite over to France!

The Pitman’s Revenge Against Buonaparte

The now crop-sick hero must soon change his note
For a large Norfolk dumpling sticks fast in his throat,
Then let us rejoice that we live in a land
Where GEORGE has some thousands such-like at command.

Crocodile’s Tears: Or, Bonaparte’s Lamentation. A New Song (1805 or later)

By gar, I find my ardor fail, and all my courage cool, Sir,
De World confess I am de Knave – de English call me fool, Sir:
Hard fate! Alas, that I am both! My heart of grief is full, Sir.
By gar, me wish I was at peace! With honest Johnny Bull! Sir.

Tune – “Despairing beside a clear Stream”

Ah! Boney, thy wishes are vain,
Thy murd’ring schemes lay aside;
For Britains are lords of the Main,
And Providence fights on their side.

The Threatening of the Whole Continent Against Buonaparte (after 1810)

Swaggering Boney,
Galloping Boney,
Runaway Boney,
Where are you now?

They set fire to his tail so off Boney runs,
O poor Boney, long-headed Boney,
Short-legged Boney we’ll soon have you now.

His race is run at last, tho’ for a long time past,
He never studied anything but evil, O.
Although he was but small he’d swagger over all.
Led on by his dear friend, old nick the Devil, O.

There are different versions of this song about Napoleon’s exile to Elba, one in the Broadside Ballads Online collection, and this one, sung in 1893 by Henry Burstow (who learned it from his father) for folk song collector Lucy Broadwood. She identified the tune as a variant of “the Princess Royal,” which was in print in English books as early as 1727. (6)

I did pursue the Egyptians sore,
Till Turks and Arabs lay in gore;
The rights of France I did restore
So long in confiscation.
I chased my foes through mud and mire
Till in despair my men did tire.
Then Moscow town was set on fire.

You can listen to Irish traditional singer Jim MacFarland performing a version of “Boney’s Lamentation” on the Irish Traditional Music Archive.

Who was it spread war’s dire alarms,
And set all Europe up in arms?
Who shower’d upon us discord’s storms?

This song, about Napoleon’s escape from Elba and return to France, is also known as “Boney’s Return to Paris.”

Tune – “London now is out of Town”

London now is come to town
Few are found who tarries,
Boney there, has made them stare,
And drove them back from Paris.

You’ve heard of a battle that’s lately been won,
By our brave British troops under Duke Wellington,
How they bang’d the French army and made Boney run,
Before the brave lads of Old England,
Huzza for Old England’s brave boys.

My name’s Napoleon Bonaparte, the conqueror of nations
I’ve banished German legions, and drove Kings from their thrones,
I’ve trampled Dukes and Earls, and splendid congregations,
Tho’ they’ve now transported me to St. Helena’s shore.

In Rochford dock the fleet lay moored,
The streamers wavered in the wind,
When Napoleon Buonaparte came on board.
Saying, ‘where shall I some refuge find.’

Napoleon died on May 5, 1821, as a prisoner on the remote British island of St. Helena. The following songs were written after his death.

The Parliament of England and your Holy Alliance,
To a prisoner of war you may now bid defiance,
For your base intrigues and your base misdemeanors,
Have cause him to die on the Isle of St. Helena.

The song takes the form of a conversation between Napoleon’s son (Napoleon II) and his mother, Napoleon’s second wife Marie Louise. It says Napoleon was defeated because he failed to beware of the “bonny bunch of roses”: the British army and, symbolically, the union of England, Scotland, Ireland and Wales.

But while our bones do moulder,
And weeping willows round us grow,
The deeds of bold Napoleon
Will sting the bonny bunch of Roses, O.

Tho’ Kings he did dethrone and some thousands caused to groan,
Yet we miss the long lost emperor Napoleon.…
Oh! Bring him back again it will ease the Frenchman’s pain,
And in a tomb of marble we will lay him with his son.

Ah England! He cried, did you persecute that hero bold,
Much better had you slain him on the plains of Waterloo;
Napoleon he was a friend to heroes all, both young and old,
He caus’d the money for to fly wherever he did go.

You can listen to folk singer Andy Turner singing a version of “The Grand Conversation of Napoleon” on A Folk Song A Week.

When I led them to honour and glory,
On the plains of Marengo, I tyranny hurled,
And wherever my banner, the Eagle, unfurled,
Twas the standard of freedom all over the world,
The signal of fame! Cried Napoleon.

This song refers to the return of Napoleon’s remains to France in 1840.

But of a valiant Corsican, as ever stood on Europe’s land,
I am inclined to sing in praise, how noble was his heart,
In every battle manfully, he struggled hard for liberty.
And to the world a terror was, Napoleon Bonaparte.

Napoleon is no more, the French did him adore,
Their allied powers did join their kingdom for to save,
They ne’er could him subdue, till he made some of them rue
And they were in a stew, by Napoleon the Brave.

This tune, also known under other “Napoleon Crossing…” titles, may actually have originated as a military march during the Napoleonic Wars (see the Banjo Hangout Discussion Forum).

This song, which nearly causes a brawl between General Charles Lallemand and a fiddler in Napoleon in America, originated as a fiddle tune in the 19th century.

Hudson Lowe was the governor of St. Helena during Napoleon’s imprisonment on the island.

30 commments on “Songs About Napoleon Bonaparte”

Never were so many melodies, verses and choruses expended in praise, condemnation, pity and ridicule as in the case of Napoleon.