Symbols of Napoleon: The Violet

In Napoleon in America, as General Piat leaves his house to command an uprising in favour of Napoleon, his mother twists a violet around her son’s button. How did the violet become a symbol of Napoleon?

The violets of spring

The association began in April 1814, with Napoleon’s first abdication of the French throne. He was exiled to Elba, a small Mediterranean island 260 km south of France. Before leaving France, Napoleon supposedly told his friends and supporters that he would return with the violets, which bloomed in the spring. Thus his followers began to wear violets, or violet-coloured ribbons, silks, or watch-strings, as a way of signalling to the like-minded that they were Bonapartists.

Not only in the villages around Paris, but throughout the whole of France, and even on the banks of the Lake of Geneva, the violet was, immediately after his exile, known to be a secret symbol by which the partisans of Bonaparte denoted their chief, and recognized each other. They wore rings of a violet colour, with the device, ‘Elle reparaitra au printemps’ [It will re-appear in spring]. When they asked, ‘Aimez vous le violette!’ [Are you fond of the violet?], if the answer was ‘Oui,’ [Yes] they inferred that the answerer was not a confederate. But if the answer was ‘Eh bien’ [Ah! Well], they recognized a brother, initiated in the secrets of the conspiracy; and they completed his sentence, ‘Elle reparaitra au printemps.’

Similar secret symptoms, less important for their professed purposes of secrecy, than as a romantic garniture of conspiracy, calculated to excite the imagination, and peculiarly adapted in that respect to the character of Frenchmen, had been employed a twelvemonth before by the partisans of the House of Bourbon. A royalist then sounded any man, of whom he entertained hopes, by saying Deli: if the answer was vrance, the recognition of the principle was reciprocal and satisfactory. (1)

Violets and Napoleon’s return to France

When Napoleon escaped from Elba and returned to France in 1815, the violet became an open symbol of support. Helen Maria Williams, a British writer and admirer of the French Revolution who spent much of her adult life in Paris, was in the city when Napoleon arrived on March 20.

Tumult and disorder prevailed in the streets, which were soon filled with newly arrived troops, and the soldiers and populace were alike decorated with a bunch of violets.

That lovely and earliest flower of spring, the symbol of timid beauty, and the soft harbinger of summer, had been transformed into the badge of a sanguinary faction. The military, who were initiated in the secret of Bonaparte’s intended return in the spring, had applied to him the nick-name of Le Père la Violette. Rings of a violet colour had been worn by his party, and the name of the violet was pronounced with other words of mysterious import, and veiled, like the modest flower itself, from general observation. But on the morning of the 21st March, the guilty, the triumphant violet appeared glaring in the button-hole of every Bonapartist’s coat, or stuck into his hat, with all the ostentation of an order, or a cockade. (2)

Early in the morning of the 21st, the shop-keepers of Paris were busily employed in changing their signs. Every where the crested lily disappeared, and the victorious eagle again stretched over the portals his terrific wings. The newspapers, bearing the stamp of the eagle, proclaimed the entry of the Emperor Napoleon on the preceding evening into his capital. The streets were filled with newly arrived troops, who, with the populace, were decorated with a bunch of violets, the badge of fidelity to Bonaparte. (3)

When Napoleon was in exile, the restored Bourbon monarchy censored pictures of him. Artists and print-makers evaded the restrictions by using Napoleonic symbols such as the violet. After Napoleon’s return, Jean-Dominique-Étienne Canu published a popular engraving entitled “Violettes du 20 mars 1815.” Also known as “Corporal Violet,” or “Le Secret du Caporal La Violette,” the print appears at first glance to consist simply of violets. It is, however, an optical illusion. It contains the profiles of Napoleon (under the green leaf on the right, which resembles Napoleon’s bicorne hat), his wife Marie Louise (facing Napoleon, on the far left, under the second violet), and their son, the King of Rome (on the right of the central stems, next to the lower violet). Around the time of Napoleon’s final defeat and abdication in June 1815, British caricaturist George Cruikshank produced a print entitled “The Peddigree of Corporal Violet,” in which a Canu-like bunch of violets appears at the top of dung-fed Napoleonic growth. 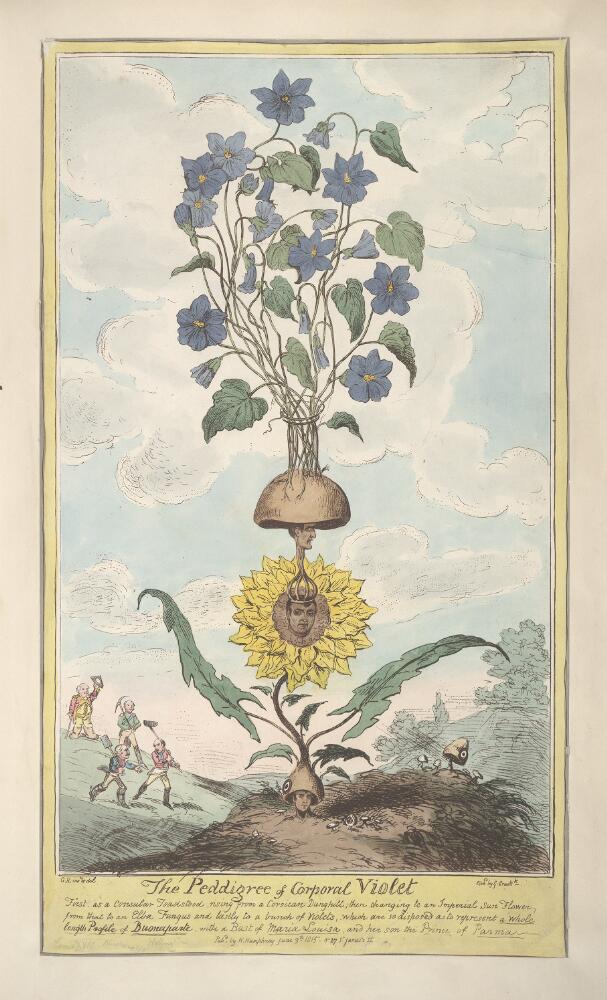 Violets continued to be regarded as a symbol of Napoleon during his exile on St. Helena. However, they also appeared in caricatures, ballads, pamphlets and plays that ridiculed Napoleon. A group of British visitors to France in 1815 noted a brochure that included an allusion to a certain “Odeur des Violettes, that prevails in Paris, and which the writer asserts the soldiers had mistaken for laurels.” (4)

Lady Morgan, visiting France in 1816, went to a performance of a vaudeville piece called “Flora.” The characters were composed of flowers, presided over by the goddess Flora. Flora crowns the lily – a symbol of the reigning Bourbons – queen of the garden. Flora then takes note of a member of her train covered in purple and cobalt blue.

She inquires who is that sulky flower that stands in a ‘morne silence’ [sulky silence], pouting in the corner, and, after some delicate hesitation, the sister blossoms reply that is the guilty, proscribed, usurping violet, who alone, of all the flowers, had refused obedience to the ‘crowned lily’ in the absence of the goddess. The violet is instantly called into court, reprobated, and condemned; but, as clemency is the order of the day, the violet is to be ‘amnestifié,’ and by this term I thought we should have seen her pretty head cut off. But her dark veil was only removed, and she was permitted to take her place in the parterre of loyalty, which surrounded the goddess, and who all sung a finale, in praise of Flora, and Louis XVIII. (5)

Symbols of Napoleon: The Eagle

6 commments on “Symbols of Napoleon: The Violet”

On the morning of the 21st March, the guilty, the triumphant violet appeared glaring in the button-hole of every Bonapartist’s coat, or stuck into his hat, with all the ostentation of an order, or a cockade.