Are you stuck at home and wondering what to do? Here are some tips for dealing with boredom – or ennui, as it was commonly called – from the 1830s, when a cholera pandemic was raging around the world. 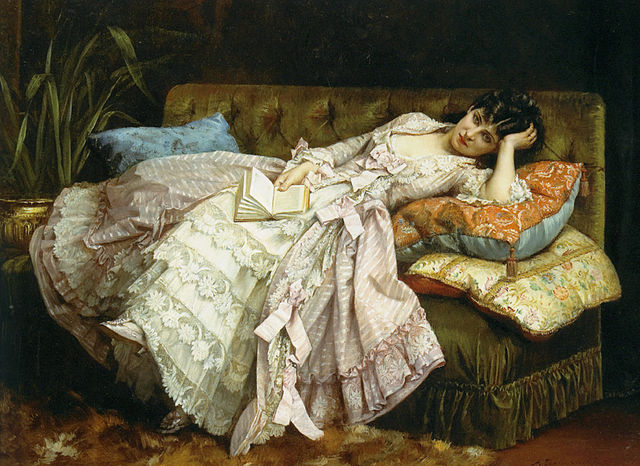 One should never suffer himself to become a prey to ennui, or, to use the nearest phrase we have to it in English, the blue devils. These azure imps, if once they get the possession of a man – I don’t include woman, for she has a thousand charms to dispel – are a greater curse to him than were the plagues of Egypt to its royal master. He cannot walk, for he has no object in view – he cannot sit, or even lounge. His spirits are too restless, his nerves too irritable – he cannot converse, for that is a labour to him – to read he is unable, his attention cannot be fixed – to sleep with comfort is equally impossible with him; for his tormentors…move about him in dreams and fill them with inquietude.

If it was made the curse of man that in the sweat of the brow he should eat his bread, it is equally true…that in laboring for that bread, he should find his greatest blessing. I envy no man his carriage who rides abroad in it without occupation or object in view. I am sure of being happier trudging on foot, so long as I am intent on some honest and honorable pursuit. (1)

Watch an opera, or a mime

The cholera has spread such terror in Paris that the Theatres are menaced with total ruin if this panic should last much longer. It is a truly sad spectacle – the saloons empty – the banquets deserted – the rows of boxes without a single spectator, and the actors grimacing in gaiety or sentiment before a few idlers, who listen mechanically to the scenes of a comedy or the choruses of a vaudeville, and whose vague and uneasy attention discloses a grave pre-possession of mind and a sad anguish of the heart. All this passes in an atmosphere of chloride of lime, camphor, and vinegar, and in the midst of a continual buzzing of the words ‘cholera,’ ‘malades,’ ‘bulletins,’ ‘morts,’ and ‘hopitaux;’ sadness, loathing, fear, and ennui from one corner of the Theatre to the other. Such are the characteristics of the Theatres for the last eight days. It has, however, been made a subject of remark that the large Theatres and the minor ones are deserted, whilst the Opera and the Funambules are overflowing with spectators. The highest class and the lowest populace appear to required distraction in the same degree. The music of Meyerbeer and the graces of Taglioni, equally with the buffooneries of Debureau, can dissipate fear and diminish danger. At the Opera you could imagine yourself in the midst of the most prosperous days of the Restoration – at the Theatre Français, at the Gymnase, and others, one feels that he is in the very worst days of the Revolution. (2)

The New York Mercantile Advertiser says that it has been a subject of general remark that since the appearance of the cholera, intemperance has increased to an alarming extent. It observes, ‘Many people have not the inclination or the power to direct their attention to study, and having no places of amusement within their reach, seek to drown ennui in ardent spirits, which once tasted, many have not sufficient control over their appetite to pause, but rush onward madly to destruction. We suggest to those who have so laudably embarked in the suppression of our intemperance to think of some mode of innocently amusing the minds of the middling classes; let them…offer a premium for the best essay on the subject. Of one thing we feel convinced – while total abstinence is not only their aim, but also a rigid adherence to certain religious creeds, to the exclusion of amusement, we think that though temporary good may result, the benefit will not be enduring. Let any one dwell on the construction of the human mind, and think how many and various are its desires and appetites, and we are convinced he will think with us, that those desires and appetites may be changed to a more moral and healthy channel, but they never can be subdued. (3)

All who have been in the habit of resorting to this town [Margate, England] must had had frequent cause to regret the monotony and dullness which occasionally brood over it, as a cloud surcharged with cholera or plague. For some time past this hebetude, with its accompanying ennui, has exercised its undisturbed control, and turned the bright summer months to the dark gloom of throat-cutting November – until, on the 21st [August] the spell was broken – the ladies’ tongues were released from bondage, and the whole town became in commotion through the following adventure:

Two military sprigs from Canterbury, whose names I will forebear to disclose, but who are said to be attached to the 93rd Regiment, have been for some time displaying their puppyism at the various places of amusement here, in successful endeavours to emulate the dandyism of the notorious 10th [Regiment], and annoy all those whom they presume to be below their level. These new Damon and Pythias…with that consummate assurance and self-conceit which characterize the fop and, as often, the fool, amidst other displays of blackguardism… commenced their insulting operations on every female whom they approached, and among others, on ‘the dark-eyed’ daughters of Nathan, the intimate friend of Lord Byron, and celebrated composer of the ‘Hebrew Melodies.’ Those who know Nathan can well imagine how he would have acted on the receipt of this intelligence, communicated to him by his insulted daughters. He did act as his friends expected. He first demanded an explanation – on which the ‘gallant sons of Mars’ attempted to sheer off, and finally denied the fact; but as Nathan persisted in his demand, they tried to shuffle out of the disgraceful affair, by doubting his qualifications to receive the satisfaction of a gentleman. Upon this, he very properly knocked down these military soi-disant gentlemen on a dunghill, where, without attempting to crow, they only sought to arrange their white feathers. (4)

The editor of the New Orleans Herald says, ‘The theatres are closed; it is too hot to hunt; too tedious to fish; and most of us are almost too indolent to read. The only amusement in which our citizens can now indulge is to ride out in the dusk of the evening, or walk the streets and inhale the cool air after dark. In these times of dullness, the man who would invent any pleasant means of banishing ennui should be looked upon as a public benefactor.’

If the stupidity of the climate had not infected the editor, he might, could, would, or should have said, ‘We are the public benefactor – the pleasant means of banishing ennui.’ (5)

We certainly are plague-struck! Each way we turn – each object we meet – is spotted with the mark of the pestilence, ennui. Breakfast is joyless – we have no chuckle at the reminiscence of over-night’s row in the House – no dreamy blissful recollection of the look of love ‘our lady’ cast from her opera-box on us – no soft melody vibrating in our ears of the sweet singers of the season. We are plagued with the absence of all these. We take up a paper – it is ‘full of emptiness’…. Is it it not a plague to wade daily through six columns on the directors’ evidence on the Secret(!) Committee on the Affairs of the Bank, with the consolation of reading ‘to be continued’ at the termination? Is not this, we say, an inducement to commit suicide? …

We were…in Grosvenor-Square – soliloquizing ‘as we went, for want of thought’ of anything, save that of our manifold plagues – a sudden fit of sneezing, the interesting concomitant of woe, seized us; and…the reverberation actually roused three old housekeepers, who shut the windows in apprehension of heaven’s artillery.

Reader! – Is it not plaguy hard the times should be, when the noise of an honest man’s nose should be mistaken for a thunder-clap? (6)

Quarantine in the 19th Century: Some Vignettes

14 commments on “How to Deal with Boredom: Tips from the 19th Century”

Many people have not the inclination or the power to direct their attention to study, and having no places of amusement within their reach, seek to drown ennui in ardent spirits.