When an Englishman Met a Napoleonic Captain in Restoration France

France and England were at war for most of the period between 1793 and 1814. This made tourism between the two countries extremely difficult. After Napoleon was defeated and exiled to Elba in April 1814,  English visitors flocked across the English Channel, eager to see Paris now that France was under the rule of England’s ally, King Louis XVIII. One of those making the trip was British journalist John Scott, who left the following account of one of his countrymen. 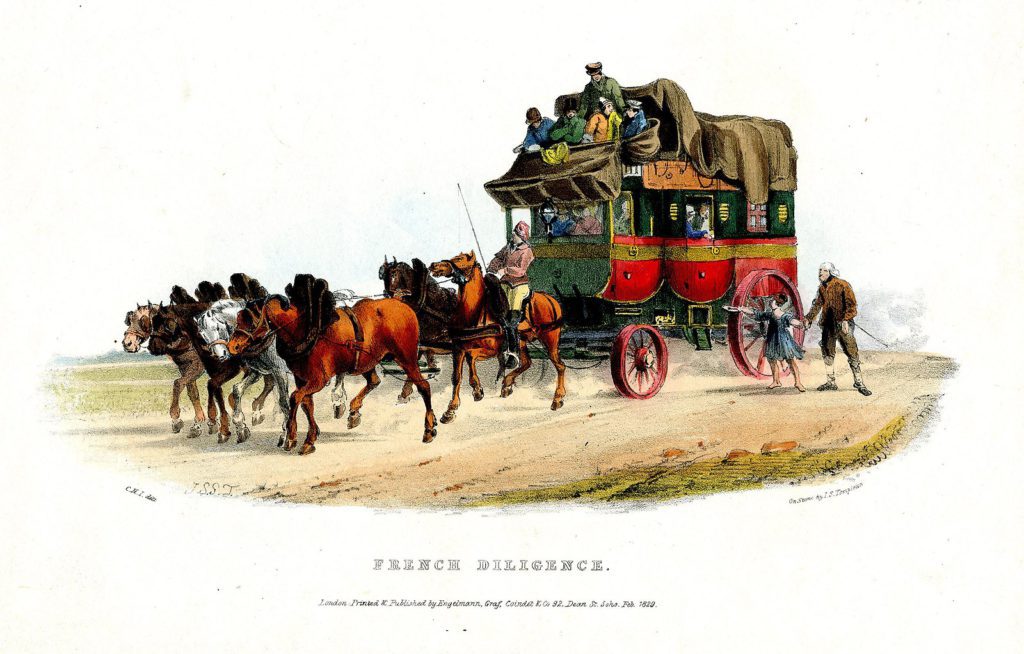 The chances of travelling threw amongst our party a young English shopkeeper, who had taken it into his head to pay a visit to Paris of one week’s duration. He must, he said, be back to business by Monday for the bustling time was coming on. He knew not one word of the French language, nor a single individual in the French capital: his days and nights had been devoted, not to Belles-Lettres, but to the ledger; yet he was determined to see for himself what was fine in the Louvre. This was the great object of his expedition and it was disappointed — for the Louvre was shut against the public when he arrived, and he did not stay long enough to enable us to fulfill our promise of procuring him a permission to be admitted. He was an excellent national specimen, of faults as well as of good qualities, and furnished some amusing contrasts on the road; so that his introduction here will probably be held very excusable.

Never were instinctive curiosity, personal confidence, and regardless intrepidity more conspicuous than in the travels of this personage. He knew but one side of every question, and he was as positive as if he had spent his life in impartial examination; he had provided for nothing, but he was quite sure of finding himself comfortable in every thing. He had not procured a passport, for he was certain passports were all nonsense, — they would never dare to stop an Englishman; one could travel all over England without a passport. He had no letter of credit, or French money of any kind; but he had plenty of bank-notes, and he would like to see a Frenchman refuse a Bank of England note! Of course he was exposed to many difficulties, which, had he been alone, he would have found serious; but he treated them all with the utmost carelessness, and attributed them to the awkwardness and ignorance of the people amongst whom he had come.

The first occurrence that a little shook his notion that an Englishman might stride, like a superior being, over France, just as he pleased, attending to none of its customs or rules, and treated with respectful submission by its inhabitants, — was the entrance of a young French dragoon officer, of a fine commanding figure, and authoritative expression of face, into the diligence. Our shopkeeper saluted him with just such a look of familiar examination as that with which Sir Joseph Banks would regard an inhabitant of a South Sea island on his first visit to Soho square: but there was a checking haughtiness in the returned glances that soon had its influence on the spirits and behaviour of our countryman.

The soldier, it was easy to see, had no feeling of partiality towards the foreigners he had accidentally joined: and he soon explained the state of his mind in this respect by pulling out of his pocket a snuffbox, on the top of which there was a beautiful portrait of Napoleon in enamel. He carried his devotion so far as to bear about his person another portrait of the same individual suspended by a black ribbon, worn round his neck. He was evidently a gentleman, and was the first we had seen in France who bore that assurance in his external appearance: this circumstance I believe repressed our companion far more than the fierce sword and fiercer looks of the stranger.

Besides, all that our traveller had read in his country’s newspapers of that monster Buonaparte, rushed into his mind, and to have before his eyes, and actually touching his knees, a man who wore the pictures of such a wretch, who clearly regretted his downfall, and who had most probably taken a part in his dreadful deeds, quite bewildered the comprehension, and overpowered the senses of the Englishman. He probably would not have felt more alarmed or horror-struck if Dr. Faustus, immediately after making over his soul to the Devil, had sat down within six inches of him; or if one of those human beings who float down the Ganges, devouring corpses, had come reeking from such a repast to breathe in his face.

The officer resisted conversation with more firmness than is usual in France: it generally happens there that sulkiness soon gives way to loquacity, but our military companion cut off the approaches to his sentiments, and shut himself up in almost total incommunicativeness. Once only he made an observation which bore on the state of public affairs; — and it was perfectly explanatory of the whole system of his thinking — its causes as well as its condition. Something was said to convey a civil compliment to France, in an expression of satisfaction that she was now open to the visits of Englishmen, and a hope was added, that this pleasant intercourse might last, and the tranquillity of Europe remain uninterrupted. The remark was not addressed to the officer, but he replied to it, evidently under a strong impulse. ‘Very good, Gentlemen, — this tranquillity of Europe is a fine thing, but will it not keep me always a Captain?’  — Toujours Capitaine, was the emphatic conclusion of this sudden burst from taciturnity.

He did not long continue with us, and the traveller of a week looked after him as he descended the steps of the vehicle, as a man looks after the smoke of a piece of artillery that has suddenly gone off near him, and startled him more through the influence of surprise than of fear. Our countryman withdrew his looks slowly from the disappearing object of his astonishment and then fixed his eyes on ours, as if to say — ‘Well, this is something, however!’

To those of us who had spoken to the Frenchman, he addressed himself with that sort of admiring curiosity for information which the crowd, who visit a menagerie of wild beasts, show towards the man who dare put his hand into the lion’s mouth, and venture within reach of the tiger’s paw. ‘Did he really, then, like Buonaparte’? — ‘Had he been at Moscow?’ — ‘Was he likely to rebel against Louis the Eighteenth?’ (1)

The Englishman got his answer in March 1815, when Napoleon — having escaped from Elba — returned to France and was welcomed by enough of his former soldiers to enable him to peacefully regain the French throne. Napoleon remained in power for three months before being defeated by a coalition of British, German, Dutch-Belgian and Prussian forces at the Battle of Waterloo. He was exiled to the remote island of St. Helena where he died in 1821.

He probably would not have felt more alarmed or horror-struck if Dr. Faustus, immediately after making over his soul to the Devil, had sat down within six inches of him.