Things People Were Thankful For 200 Years Ago

Although Thanksgiving traditions have changed over the years, giving thanks for life’s blessings has been customary for centuries. Here are some things people were thankful for 200 years ago. 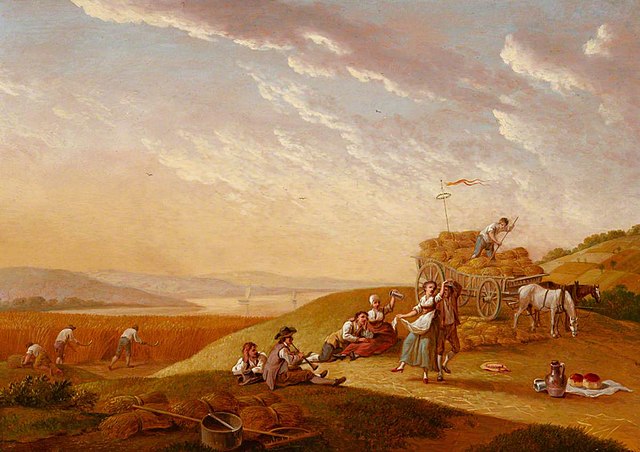 The present compared with the past

Mary Ann Wodrow Archbald (1762-1841) emigrated to the United States from Scotland in 1807 with her husband, James, and their four children. They settled on a farm in Auriesville along the Mohawk River in eastern New York State. In July 1820, Mary Ann wrote to her cousin John Ruthven, who lived in New York City:

I would give a great deal to have you here just now because I think you would very much enjoy the surrounding scenery. You remember the field behind the house that Jamie was ploughing – it is the perhaps the handsomest field of wheat you ever saw & you would be pleased to see him with his pail of milk & water beside him, swinging the cradle scythe from morn till night. We have the most blessed harvest weather – never did the fields exhibit so rich an appearance of plenty as they do at present. A field of ripe wheat waving with every breeze is really a beautiful object independent of the other agreeable ideas suggested by the sight of it. The deep green of the corn, trees, &c., also form a fine contrast to it, & the oats look still handsomer than the wheat, being a fine bright yellow, the other has a brownish cast. This grain also reminds us of home. The face of nature will be considerably changed before you get to us, but almost every diversity of it is pleasant at least to those who can view it with your eyes, who can see in every change & every movement the hand of Him whose tender mercies are over all his works.

To your affectionate question about my being really satisfied with my jaunt, I can without hesitation answer in the affirmative. I had a great deal of enjoyment, indeed as much nearly as it was possible for me to have. Your long hard streets reminded me that I was old, but what of that – I enjoyed rest & a book more when I got in, & if fatigue sometimes prevented me from so fully enjoying our walks as I otherwise would have have done, I have amply made up the deficiency by the pleasures of memory & reflection…. Independent of every thing else, it was worth my while to go to [New York City] for Montgomery’s poems & my fine spectacles. We had on the whole a pleasant sail up…. On arriving at Albany I again experienced that dreary feeling which the approach to this town especially by water never fails to inspire. It was here 13 years ago I felt myself destitute, a stranger in a strange land with a helpless train around & [my daughter] Louisa in my arms. It is true that the goodness of the Lord has followed & graciously supported me & when I compare the past with the present I ought to be very thankful. (1)

Not being born a slave

English merchant Adam Hodgson (1788-1862) travelled across North America from 1819 to 1821. In a letter to friends and family, written in Charleston, North Carolina, in February 1820, Hodgson reflected on his visit to Virginia.

You will believe that it was not without the most painful emotions that I for the first time contemplated the revolting spectacle of man in bondage to his fellow-man, and that I felt myself surrounded by unhappy victims for whom nature and humanity seemed in vain to urge the unanswerable plea, ‘Am I not a man and a brother?’ …

Three out of four of the black coachmen we had the other day, (all slaves,) I found very intelligent. They said, all they wanted was good masters, but that their liability to be sold to bad ones, and to be separated from their families, was a cruel part of their condition; that in that part of the country (Virginia), they had Sunday to themselves; one holiday in April, one in May, and four at Christmas; that they had public worship on Sundays, and on one evening in the week; that many of them could read; and that some of their preachers were slaves. I cannot describe my feelings when sitting by the side of a fellow-creature and talking to him of his own price! Often did a little verse, with which our English children are familiar, recur to my recollection, with some sense, I hope, of the gratitude which it ought to inspire.

‘I was not born a little slave,
To labour in the sun,
And wish I were but in my grave,
And all my labour done.’ (2)

John Quincy Adams (1767-1848) was the sixth president of the United States. Before that, he held many public offices, including serving as Secretary of State under President James Monroe from 1817 to 1825. Adams wrote to his wife, Louisa, in August 1821:

I well know that I never was and never shall be what is commonly termed a popular man, being as little qualified by nature, education, or habit, for the arts of a courtier, as I am desirous of being courted by others. Such as I am, I envy not the reputation of any other man in the Union. There is not another man in the Union, excepting the Presidents past and present, who receives or continues to receive from the people of this country indications of esteem and confidence more distinguished and flattering than I have. With the exception of one signal mark of dissatisfaction from the legislature of my native state thirteen years since, my life has been one continual succession for more than five and twenty years of high, of honorable and important trusts, and of literary and scientific distinctions – all conferred without any of those blandishments by which some others acquire esteem or favors. If ever a man had reason to be grateful for the portion of public consideration which has been shown him, it is I, and I trust I am grateful for it. (3)

Friends in a time of suffering

Louisa Adams, the wife of John Quincy Adams, frequently suffered from illness. In January 1819, she wrote to her father-in-law, John Adams, about one such episode.

Waked very unwell and while in bed received a note from Mrs. Hull requesting me to present her to Mrs Monroe at the Drawing Room this evening, stating that her husband was going out to dinner and could not accompany her. I answered I should be happy to attend her and would call for her at 8 o’clock intending, if I remained so ill, to send her with Mr A [John Quincy Adams] and Miss Buchanan…

When Miss B. returned she refused going to the drawing room and, as it was very late, I was under the necessity of going, although my illness was every moment increasing. I made Mr A promise he would not lose sight of me as I was apprehensive of a fainting fit or something equally disagreeable, which would have made talk for a month. We called for Mrs. Hull and I introduced her to Mrs. Monroe and Mrs. Hay, but finding myself more and more indisposed, in fact in a high fever, I made a sign to Mr A and immediately sought my carriage to return home and immediately on arriving was put to bed. At about one o’clock I was seized with a dreadful faintness so deadly that I thought my hour was come. I retained my senses but cold clammy dews hung over me and it was some time ere I could shake off the heavy…pressure which seemed to crush my heart. When I recovered, I found all my family round me and soon after the doctor arrived. The spasms soon returned and I remained in great agony during the night, which was only occasionally suspended by the complete exhaustion of wearied and almost expiring nature. Oh my dear Sir, great as is the suffering, you know not with what joy and delight my heart beats in thankfulness to my Creator for the kind and unwearied attentions of my affectionate friends on those occasions, and indeed I am so surrounded with blessings [that], without these necessary checks to the arrogance of human nature, I fear I might be tempted to forget that the hour must sooner or later arrive in which I must surrender my soul to its maker, and with a deep sense of gratitude I implore his farther mercies to enable me to sustain with propriety the trials which yet await me. (4)

The health of one’s children

Mary Brown Austin (1768-1824) was the mother of Stephen F. Austin, who established the first Anglo-American colony in the Mexican province of Texas. Mary wrote to Stephen from Hazel Run, Missouri, in July 1822:

The long silence of my dearest sons has for a long time caused great anxiety of mind to your mother and sister. We have had no letters from you since you left Mexico…. What can possibly be the real cause of your long silence I cannot tell, but am willing to conclude your letters have got lost through the neglect of those who had the charge of them…. In regard to your sister [Emily, recently widowed] and myself, I can only say we are exerting ourselves by our industry and economy in order to provide for the wants of another winter. Emily has been engaged in keeping a female school for the last three months and will continue it three months more. We have five boarders at 15 dollars a quarter and nine day scholars at three dollars. This we think will be sufficient to furnish our family with clothing and other necessaries for the winter. I am truly thankful that your sister is blessed with fortitude and strength of mind to sustain her in every difficulty. She has no friend to act for her or to assist her in any thing, but as long as she is blessed with health she has nothing to fear for the want of the necessaries of life. We still look forward with faith and hope of seeing better days. Most sincerely do we pray to the father of mercies to preserve the lives of my dear sons and to crown their exertions with complete success. We well know if you are spared and are so fortunate as to accumulate property you will most cheerfully share it with her and her children, for I am firmly persuaded my dear Stephen and his brother [James] will ever prove to be the best of sons and brothers and are at this moment doing every thing in their power for our future happiness and comfort. (5)

Napoleon’s View of Slavery and Slavery in New Orleans

8 commments on “Things People Were Thankful For 200 Years Ago”

A field of ripe wheat waving with every breeze is really a beautiful object independent of the other agreeable ideas suggested by the sight of it.