Elisa Bonaparte Baciocchi was not as well-known as her sisters, beautiful Pauline and treasonous Caroline, but she was more capable than either of them. In fact, she was the Bonaparte sibling most like Napoleon, although she had the least influence over him. Napoleon himself said, “Elisa has the courage of an Amazon; and like me, she cannot bear to be ruled.” (1) 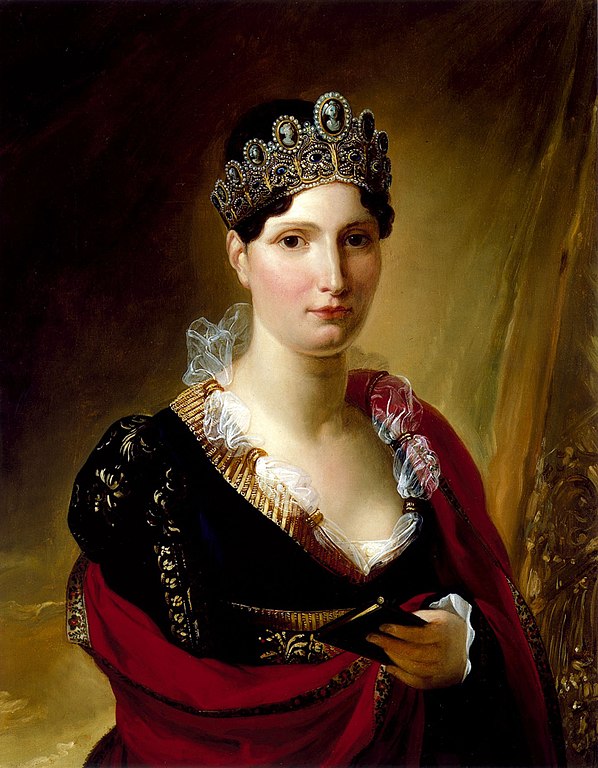 Maria Anna Bonaparte – she did not adopt the name “Elisa” until she was about 18 – was born in Ajaccio, Corsica on January 3, 1777, seven and a half years after Napoleon. She was the fourth of Charles and Letizia Bonaparte’s eight surviving offspring, and their eldest daughter.

Napoleon moved to France to go to school when Elisa was just two years old, so the two of them did not have a chance to become particularly close. The one anecdote we have of them together in Corsica does not reflect well on Elisa. She apparently allowed Napoleon to be whipped for having eaten a basket of a relative’s grapes and figs, even though she and a friend were the guilty parties. (2)

When Elisa was seven, she was admitted on charity to an exclusive boarding school at the convent of Saint-Cyr near Versailles. Her father died the following year. Napoleon, who was at the Royal Military School in Paris, kept an eye on her. A family friend recounted:

One day my mother, and some other members of my family, went on a visit to Saint-Cyr, and [Napoleon] Bonaparte accompanied them. When Marianne [Elisa] came into the parlour she appeared very melancholy, and at the first word that was addressed to her she burst into tears…. At length my mother learned that one of the young ladies…was to leave the school in a week, and that the pupils of her class intended giving her a little entertainment on her departure. Every one had contributed, but Marianne could not give anything, because her allowance of money was nearly exhausted: she had only six francs…. Napoleon’s first movement…was to put his hand into his pocket. However, a moment’s reflection assured him that he should find nothing there; he checked himself, coloured slightly, and stamped his foot…. My mother gave [Marianne] the money, and her distress was ended. (3)

Elisa remained at Saint-Cyr until August 1792, when the French Revolution resulted in the closure of all religious houses. Newly promoted to captain in a French artillery regiment, Napoleon escorted his sister back to Corsica.

The following year, Napoleon had a falling out with the Corsican nationalists. The Bonapartes fled to France. They wound up in Marseilles where, on May 1, 1797, Elisa married Félix Pasquale Baciocchi, a minor Corsican aristocrat and infantry captain 15 years her senior. Napoleon, who was by then a general, disapproved of the match. Although Baciocchi was a decent fellow, he had – as Austrian Foreign Minister Clemens von Metternich put it – an “entire want of intellectual faculties.” (4) 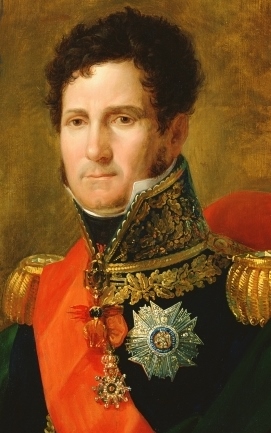 Félix Baciocchi by Joseph Franque, circa 1805

For a while the couple lived with Elisa’s favourite brother, Lucien, with whom she shared a taste for literature and the fine arts. Elisa ran a salon in Paris frequented by the painters Jacques-Louis David and Antoine-Jean Gros, the writer François-René de Chateaubriand, and the poet Louis de Fontanes, who was said to be Elisa’s lover. In 1801, Lucien wrote:

Elisa is altogether taken up with savants. Her house is a tribunal where authors come to be judged. (5)

Although she was clearly intelligent, Elisa gained a reputation of being unattractive, arrogant and sharp-tongued.

A harsh and domineering expression injured the effect of features which might otherwise have been pleasing, and her manner, which was abrupt and almost contemptuous toward inferiors, rendered her address distant and suspicious. Her bones were large and prominent, and her limbs ill-shaped: her gait was not graceful, and often subjected her to the playful mockeries of her sister Pauline. (6) 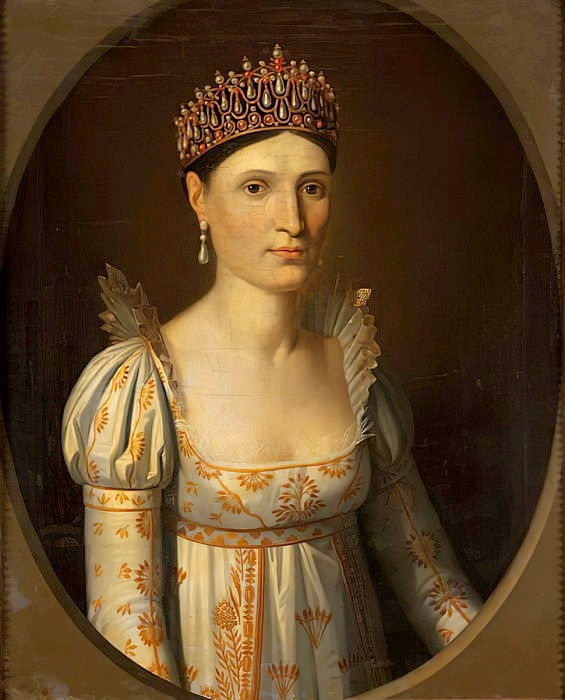 Like Caroline, Elisa was upset when Napoleon crowned himself Emperor of the French and did not give her a title. In response, in March 1805 Napoleon made Elisa the Princess of Piombino, a principality on the west coast of Italy, opposite Elba. A few months later he added the city-state of Lucca to her domain. Although Félix Baciocchi became a prince, Elisa outranked her husband.

The population of the Principality of Lucca and Piombino was only around 150,000, yet Elisa formed an elaborate court, in imitation of the one in Paris. She had five palaces, which she expanded and furnished in lavish style. In Lucca, she ordered the demolition of a block of medieval buildings, including a church, to build a French-style square called Piazza Napoléone in front of the palace.

While Baciocchi commanded their tiny army, Elisa governed. She took her duties seriously, ruling as a benevolent despot. She drew up a constitution, made laws, and saw to the interests of her domain within the Empire. In June 1806, she wrote to Napoleon:

If the public debt, the pensions and charges imposed on my States are not diminished, they will absorb more than half the revenues. Never in France, under the rule of your predecessors, did the debt exceed the quarter, while under your Empire it is barely a sixth of the proceeds. (7)

Elisa promoted agriculture and industry, patronized the arts and letters, and revived the marble quarries of Carrara. She opened schools and a new hospital. Niccolò Paganini became a court violinist. He gave private lessons to Baciocchi who, according to Lucien Bonaparte, could “scrape [the violin] passably, but so constantly is he at it that he ends by getting on the nerves both of his innocent instrument and his hearers.” (8)

Elisa did such a good job that, in 1809, Napoleon made her Grand Duchess of Tuscany, a place she had long had her eye on. She moved her court to the Pitti Palace in Florence, which she refurbished in competition with Caroline’s court in Naples. Baciocchi did not rise in rank and had little to do. As a general commanding the local military division, he remained under his wife’s supervision. The two lived apart and took lovers.

Napoleon annexed Tuscany directly to France, so Elisa had less freedom of action there than in Lucca and Piombino, although she did her best to pretend that she was an independent ruler. She complained to Napoleon about interference from French officials. Napoleon sent her letters like this one:

You have the right to appeal to me against my Minister’s decisions, but you have no right to hinder their execution in any way. The Ministers speak in my name. No one has any right to paralyse, or stop the execution, of the orders they transmit. … You are a subject, and, like every other French subject, you are obliged to obey the orders of the Ministers – for a writ of Habeas Corpus, issued by the Minister of Police, would fully suffice to arrest you. (9)

Elisa was at least able to blame the imperial government for measures that proved unpopular. She took credit for the popular ones. 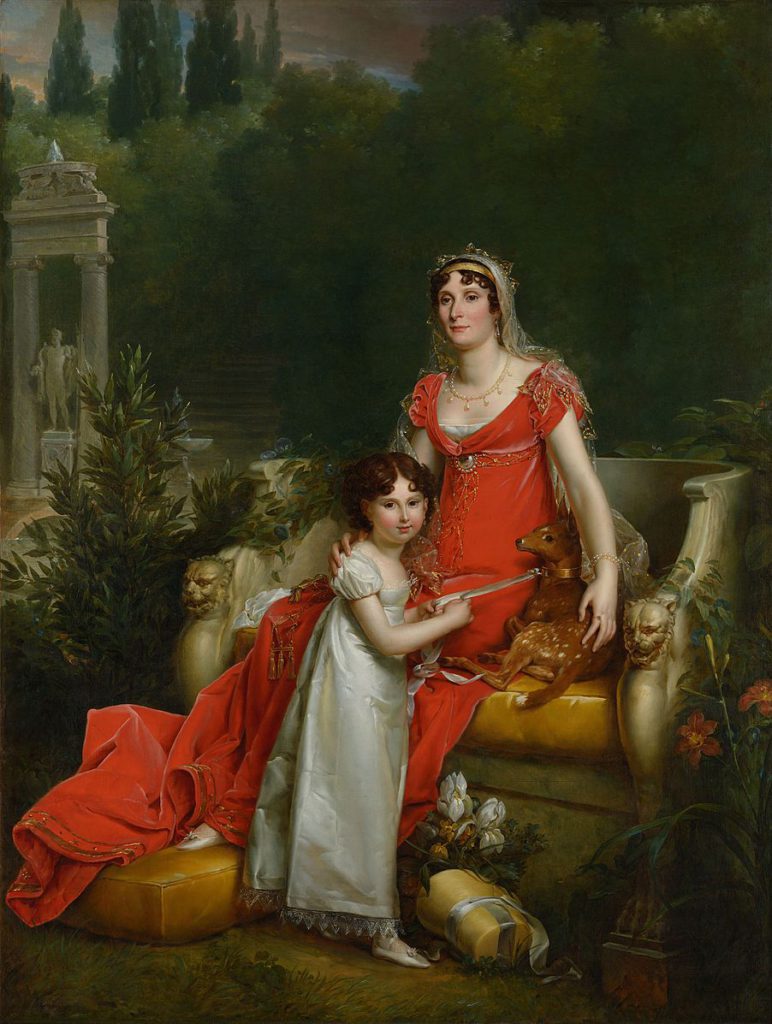 Elisa Bonaparte with her daughter, Napoléone Baciocchi, by François Gérard, 1810

When Napoleon’s empire began to crumble in early 1814, Caroline’s husband, Joachim Murat, – who had joined the coalition against Napoleon – sent troops to occupy Tuscany. Although Elisa had to leave Florence, she was allowed to remain as ruler of Lucca. Seeing that Napoleon was on his way out and hoping to secure her own position, Elisa too broke with France. She wrote to Napoleon in February of 1814:

Surrounded by powerful enemies, menaced by land and by sea, betrayed by the King of Naples who deserted your cause, I remain alone in the midst of numerous armies assembled against us. I am alone, without money, without troops, without munitions; in these desperate circumstances, what more can I do for Your Majesty? … [I]t is time that I look after my own interests, that I retain for my family the States that I owe them. (10)

The Tuscans showed no sign of attachment to their Grand Duchess. They hailed the invaders, who were soon joined by the British. Elisa and Baciocchi fled. They tried, unsuccessfully, to make off with the silver and furniture from several of the palaces. As they journeyed across Italy, seeking a place of asylum, Elisa gave birth to a son, Frédéric, on August 10, 1814, just – as one wag put it – “at a moment when she ceased to have need of an heir.” (11) Two earlier sons, born in 1798 and 1810, had died as babies. Elisa also had a daughter, Elisa Napoléone, born at Lucca on June 3, 1806.

When Napoleon escaped from Elba and returned to France in March of 1815, the Austrians arrested Elisa Bonaparte Baciocchi and imprisoned her in the fortress of Brünn. She was released once Napoleon was safely on his way to exile on St. Helena. Elisa was given permission to live in Trieste, where she assumed the title of Countess of Compignano. Félix Baciocchi acquired a comfortable villa, which Elisa furnished luxuriantly. She continued to patronize artists and the theatre. She also financed archaeological excavations in the area. In June 1820 Elisa contracted a severe infection, from which she died on August 7, 1820, at the age of 43.

When the news of Elisa’s death reached Napoleon, he shut himself up alone for several hours. When he emerged, he said, “There is the first member of my family who has set out on the great journey; in a few months I shall go to join her.” (12) He died nine months later, on May 5, 1821.

Napoleon told one of his companions on St. Helena:

[Elisa] was a woman of a masterly mind. Had I not been in existence, what is said of the Duchess of Angoulême, that she wears the breeches of the family, might with reason be said of her. She had noble qualities and a remarkable mind; but no intimacy ever existed between us; our characters were opposed to this. (13)

Baciocchi moved to Bologna, where he had Elisa’s remains interred in the Basilica of San Petronio. He died in 1841. Their son, Frédéric, was killed in a riding accident in Rome in 1833, at the age of 18. Their daughter, Napoléone, married a rich Italian count, from whom she separated after a couple of years. Napoléone’s only child, Charles, committed suicide at the age of 26. Thus Elisa Bonaparte Baciocchi has no living descendants.

Elisa has the courage of an Amazon; and like me, she cannot bear to be ruled.