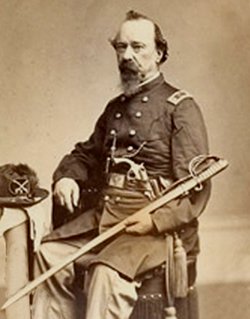 Achille and Joseph Archambault are two more names to add to the category of Napoleon’s faithful servants. They joined the imperial household around 1805 and stuck with Napoleon when he went into exile on Elba and on St. Helena. Achille was known for his fast and furious driving. Joseph wound up in the United States, where he ran a hotel in Pennsylvania and became a cavalry major during the American Civil War.

Achille Thomas Archambault was born in Fontainebleau, France, on October 13, 1792. His younger brother, Joseph Archambault, was born Olivier Agricola Archambault on June 2, 1796. Their mother was Magdelaine Archambault. Their father was Thomas Nicolas Senez, who lived at the same address as Magdelaine but was not married to her. In June 1799, when Magdelaine died, the boys were sent to the hospice of Mont Pierreux to live with their grandmother.

One day in the fall of 1807, Napoleon and his wife Josephine drove by the hospice in an open carriage. Josephine noticed an elderly priest saluting the couple through his window. Napoleon stopped and spoke to the priest, who recounted his sad circumstances resulting from the French Revolution and Terror. Moved, Napoleon offered to double the old man’s pension. He added, “If that should not suffice, I hope you will address yourself to the Empress or to me.” (1) Albert Benhamou, on L’Autre Sainte-Hélène, speculates that it may have been as result of this encounter that the Archambault boys found work in the imperial stables. Other sources state that Achille joined the imperial service in 1805.

Both brothers served Napoleon during his Imperial campaigns, and both went with him into exile on Elba in 1814. There, Achille was named head footman. The Archambaults accompanied Napoleon on his escape from Elba in 1815. They were with him during the Hundred Days and the Battle of Waterloo. The morning of the battle, Achille was one of those left in charge of the Emperor’s carriage. As recounted by the valet Saint-Denis, Achille was unable to save the carriage, but managed to rescue some belongings.

The Emperor’s carriage was taken during the evening. The postilion, Horn, who drove it, not seeing room to extricate it from the carts and other vehicles which obstructed the road, seeing the Prussian cavalry on the point of cutting him off, and besides that seeing cannon balls and bullets falling around him, unhitched his horses, while the first footman, Archambault, took the portfolio and dressing case out of the carriage. This remained where it was, and almost immediately fell into the hands of the Prussians, who pillaged it, as well as Marchand’s, which contained the Emperor’s clothes. (2)

The Archambault brothers were among the small number of staff selected to accompany Napoleon into exile on St. Helena in 1815. Achille became the head groom; Joseph was his second. Betsy Balcombe, the daughter of the East India Company employee at whose home Napoleon stayed when he first arrived on the island, recounts:

One day, Achambaud [sic], his groom, was breaking in a beautiful young Arab, which had been bought for the Emperor’s riding. The colt was plunging and rearing in the most frightful manner, and could not be induced to pass a white cloth which had been purposely spread on the lawn to break him from shying. I told Napoleon it was impossible that he could ever ride that horse, it was so vicious. He smiled, and beckoning to Achambaud, desired him to dismount; and then, to my great terror, he himself got on the animal, and soon succeeded in making him not only pass the cloth, but put his feet upon it; and then rode him over and over it several times. Achambaud, as it seemed to me, hardly knew whether to laugh or cry. He was delighted with his emperor’s prowess, but mortified at his managing a horse so easily which he had been trying in vain to subdue. (3)

This notwithstanding, Achille became known for his skill with horses, particularly for driving them fast, the way Napoleon liked. Betsy recollects a ride in Napoleon’s carriage.

[I]t was driven by the fearless Archambaud [sic], with unbroken Cape horses, three abreast, round that most dangerous of roads called the Devil’s Punchbowl. The party occupying the side nearest the declivity seemed almost hanging over the precipice, while the others were, apparently, crushed against the gigantic walls formed by the perpendicular rock. These were drives which seemed to inspire Bonaparte with mischievous pleasure. He added to my fright, by repeatedly assuring me the horses were running away, and that we should all be dashed to pieces. (4)

Though they made it without mishap on that occasion, on another they were not so fortunate.

[W]e proceeded to the carriage…. Madame Bertrand led the way, carrying her baby, little Arthur, followed by my mother, my sister and myself, and General Gourgaud. On being seated, the signal was given, the whip applied to the spirited Cape steeds, and away they tore, first on one side of the track (for road there was none) and then on the other, Madame Bertrand screaming with all her power for Achambaud [sic] to stop; but it was not until a check was put to the velocity of the carriage, by its coming in contact with a large gum-wood tree, that we had any chance of being heard. (5)

There was not much for the Archambaults to do on St. Helena. Napoleon’s stable was small and Napoleon refused to ride beyond the very small area in which he was allowed to travel without an English officer. Achille fell in love with a mulatto named Mary Ann Foss, but Napoleon refused to let them marry.

Achille developed a reputation for drinking and rowdiness. This was not helped by the following incident in 1818, as recounted by a British staff surgeon serving on St. Helena.

Notwithstanding the ruggedness of the surface of our Island, a Race-Course had been traced out at Deadwood…. During the first day’s sport after our arrival, an awkward circumstance occurred on the Course. A certain half-mad and drunken Piqueur of Napoleon, named Archambault, took it into his head to gallop with the ropes, when the Course was cleared and the horses coming up. For this transgression he was pursued by one of the Stewards and horse-whipped out of the forbidden limits. This gentleman knew not that the offender belonged to the Longwood Establishment, or he would, no doubt, have spared his whip; particularly as Napoleon at the time was sitting on a bench outside his residence, looking at the crowd through a glass; and probably interpreted the accidental chastisement his servant received into a premeditated insult to the Master. (6)

By this time, Joseph Archambault had left the island. Wanting to reduce the expense of Napoleon’s household, in October 1816 the British government compelled Napoleon to get rid of some staff. It does not seem to have been for any personal failing that Joseph was selected. Rather, as Napoleon’s valet Marchand notes:

The choice of the people who were to leave Saint Helena could only fall on those whose services were the least necessary to the Emperor….

[T]he two brothers had been driving the Emperor’s carriage, and their position was important in the stables. Additionally, the Emperor found it barbaric to separate two brothers who had devoted their existence to his service. Each of us felt the cruelty in that separation, and in order to avoid it, the grand marshal [Henri Bertrand] submitted the name of a certain Bernard, a servant of his own. The Emperor submitted the name of Gentilini, equally easy to replace in his service. The governor [Hudson Lowe] replied to those requests that Bernard was Flemish and Gentilini Italian; his instructions called for three French servants…. All attempts were fruitless, and the two brothers had to be separated. (7)

After landing in Europe, Joseph sailed to New York with Theodore Rousseau, another of the dismissed servants. They arrived in May 1817 and sought out Napoleon’s brother, Joseph Bonaparte, who was living in Bordentown, New Jersey. It is claimed that sewn inside Rousseau’s jacket were letters, a detailed map of St. Helena and a plan to rescue Napoleon from exile. In any case, Joseph Bonaparte was happy to have a direct account of his brother, and offered employment to both men. Joseph Archambault is serving as a groom to Joseph Bonaparte when he makes his brief appearance in Napoleon in America.

In 1819 Joseph Archambault married Susan Sprague. Around 1821, the couple settled in Newtown, Pennsylvania, north of Philadelphia. Joseph established a hardware store, practiced dentistry and possibly veterinary surgery (he apparently studied these at some point), and joined the Bucks County militia. In 1829, Joseph bought the Brick Hotel in Newtown, which he operated for many years. He and Susan had five children: Victor Ebenezer (1819-1893), Achille Lucien (1822-1906), Lafayette (1824-1888), Napoleon Bonaparte (1826-1901), and Roselma Josephine (1832-1914).

In May 1856 Joseph sailed to France to visit Achille. The latter had remained on St. Helena until Napoleon’s death in May 1821. Achille was present at Napoleon’s autopsy. He led Napoleon’s horse, behind Napoleon’s coffin, in the funeral procession. Once back in France, Achille settled at Sannois in the Val-d’Oise. In 1822 he married Julienne Clarisse Boursier. They had two daughters: Euphraise Clarisse (b. 1824) and Josephine Esther (1830). After the Revolution of 1830, which unseated Bourbon King Charles X, Achille got a job as an usher at the Tuileries Palace. In 1840, Achille went on the expedition to retrieve Napoleon’s remains from St. Helena and bring them back to France. Thanks to Napoleon’s nephew, Louis-Napoléon (Napoleon III), becoming ruler of France, Achille finally received the funds he had been bequeathed in Napoleon’s will, as well as the medal of the Legion of Honor. He died in 1858 in Sannois, where he is buried.

Despite being over 65 years old, Joseph Archambault enlisted in the Second Pennsylvania Cavalry during the American Civil War. He was promoted to the rank of major in 1862. He retired to a farm near Doylestown, Pennsylvania, and then to Philadelphia, where he died on July 3, 1874, age 77. His grave is in the Laurel Hill Cemetery in Philadelphia.

Joseph Archambault was the last survivor of the group that accompanied Napoleon into exile on St. Helena. His sword and portrait are in the Mercer Museum in Doylestown. One of Joseph’s granddaughters, Anna Margaretta Archambault (1857 -1956) became a noted American miniature portrait artist.

For more about the Archambault brothers, see John Tyrrell’s excellent two-part post on the Reflections on A Journey to St. Helena blog.

Madame Bertrand [was] screaming with all her power for Achambaud [sic] to stop; but it was not until a check was put to the velocity of the carriage, by its coming in contact with a large gum-wood tree, that we had any chance of being heard.