Former French Emperor Napoleon Bonaparte arrived at St. Helena, his final place of exile, in October 1815. What were his first impressions of the island, and what did the inhabitants think of him? 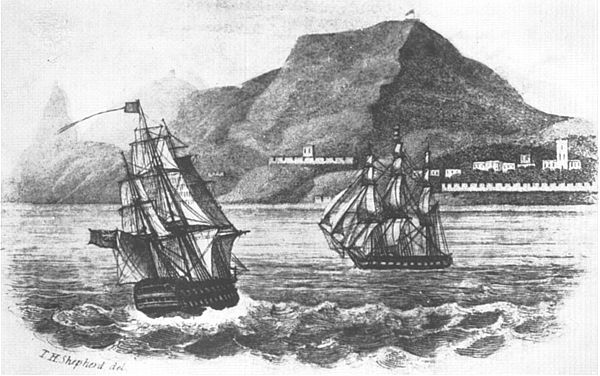 After being defeated at the Battle of Waterloo and abdicating the French throne, Napoleon gave himself up to the British. The British government decided to imprison him on the remote South Atlantic island of St. Helena. On August 8, 1815, Napoleon left Plymouth Harbour on the Royal Navy’s ship Northumberland. St. Helena came into view over two months later, on October 14, as a small dark dot on the horizon. The following day, the Northumberland dropped anchor off the island’s main settlement of Jamestown. British naval surgeon William Warden observed:

The morning was pleasant, and the breeze steady: at dawn we were sufficiently near to behold the black peak of St. Helena. Between eight and nine, we were close under the Sugar-Loaf Hill. The whole of the French party had quitted their cabins, with the exception of Napoleon, and taken their respective stations…. We did not see Napoleon until the ship had anchored in front of the Town. About eleven he made his appearance. He ascended the poop, and there stood, examining with his little glass the numerous cannon which bristled in his view….

While he stood there, I watched his countenance with the most observant attention, and it betrayed no particular sensation. He looked as any other man would look at a place which he beheld for the first time. (1)

Contrary to his normal practice, the Emperor got dressed early to go up on deck and get an overall view of the island, which he could only see imperfectly from the porthole in his cabin. He had before him a sketch of that part of the island where we were; he had told me to bring it along, and I had given it to him, heavy with sorrow. Once dressed, he went up on deck with his small spyglass in hand. One could not see the town, hidden by a terrace that followed the contours of the bay; one could only see the square church tower through the foliage, sitting between two enormous bare rocks that rose perpendicularly above the sea to a considerable height and seemed to be equipped with gunnery units on several levels.…

After watching for a few moments, the Emperor went back into his cabin without comment, allowing no one to guess what was transpiring in his soul. (2)

The Emperor viewed the prospect through his glass. I stood behind him. My eyes were constantly fixed upon his countenance, in which I could perceive no change; and yet he saw before him, perhaps his perpetual prison! – perhaps his grave! (3)

Another of Napoleon’s companions, General Gaspard Gourgaud, noted in his diary for October 15 that Napoleon was not entirely complacent at the prospect of his new abode.

I was in the Emperor’s cabin as we approached the island. He said: ‘It seems no charming place to live in. I should have done better to stay in Egypt. I should now have been Emperor of the whole Orient.’ (4)

Rear Admiral George Cockburn, the commander of HMS Northumberland, and Brigadier General George Bingham, commander of the troops sent to guard Napoleon, went ashore to look for a dwelling large enough to temporarily accommodate Napoleon and his 26 companions. They settled on a house belonging to Henry Porteous, superintendent of the East India Company gardens.

Maréchal Bertrand went on shore in the afternoon to arrange the lodging, but Bonaparte, at his own particular request, delayed disembarking until it was dark, to avoid the gaze of the inhabitants, who were crowded on the wharf to see a person who had heretofore kept nations in a state of warfare and dread for nearly twenty years. (5)

Las Cases described the scene on the Northumberland.

After dinner, the Emperor, accompanied by the Grand Marshal, got into a boat to go ashore. By a remarkable and irresistible impulse, the officers all assembled on the quarter-deck, and the greater part of the crew on the gangways. This was not the effect of curiosity, which an acquaintance of three months’ duration could not fail to have removed, and which was not succeeded by the liveliest interest. The Emperor, before he stepped into the boat, sent for the captain of the vessel, and took leave of him, desiring him at the same time to convey his thanks to the officers and crew. These words appeared to produce a great sensation on all by whom they were understood or to whom they were interpreted. The remainder of the Emperor’s suite landed about eight o’clock. We were accompanied by several of the officers, and every one on board seemed to be sincerely affected at our departure. (6)

What the Saints saw 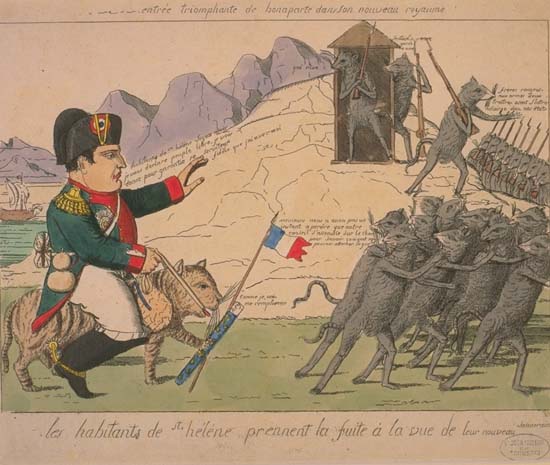 Because of the slowness of communications, the inhabitants of St. Helena – then numbering some 5,000, including over 1,000 slaves – had not heard of Napoleon’s escape from Elba, or of the Battle of Waterloo, let alone of the choice of their island to house the world’s most famous conqueror, until a few days previous. That news came via the Havannah, Icarus and Ferret, ships that had left Plymouth Harbour with the Northumberland, but had arrived ahead of it.

Betsy Balcombe, the then 13-year-old daughter of an East India Company superintendent, described the sensation this produced.

We heard one morning an alarm gun fired from Ladder Hill, which was the signal that a vessel was in sight, off the island. The same evening, two naval officers arrived at the Briars, one of whom was announced as Captain D., commanding the Icarus man-of-war. He requested to see my father, having intelligence of importance to communicate to him. On being conducted to him, he informed him that Napoleon Bonaparte was on board the Northumberland, under the command of Sir George Cockburn, and within a few days’ sail of the island. The news of his escape from Elba, and the subsequent eventful campaign had, of course, not reached us, and I remember well how amazed and incredulous they all seemed to be at the information. Captain D. was obliged more than once to assure them of the correctness of his statement. My own feeling at the intelligence was excessive terror, and an undefined conviction that something awful would happen to us all, though of what nature I hardly knew.…

The earliest idea I had of Napoleon was that of a huge ogre or giant, with one large flaming red eye in the middle of his forehead, and long teeth protruding from his mouth, with which he tore to pieces and devoured naughty little girls, especially those who did not know their lessons…. The name of Bonaparte was still associated, in my mind, with every thing that was bad and horrible. I had heard the most atrocious crimes imputed to him; and if I had learned to consider him as a human being, I yet still believed him to be the worst that had ever existed. Nor was I singular in these feelings; they were participated by many much older and wiser than myself; I might say, perhaps, by a majority of the English nation. Most of the newspapers of the day described him as a demon; and all those of his own country who lived in England were of course his bitterest enemies; and from these two sources alone we formed our opinion of him. (7)

For two days St. Helena residents gathered at the wharf, waiting to see Napoleon. Each night they returned home disappointed. Finally, on the 17th, the “ogre” appeared. Betsy described the moment.

It was nearly dark when we arrived at the landing-place, and shortly after, a boat from the Northumberland approached, and we saw a figure step from it on the shore, which we were told was the emperor, but it was too dark to distinguish his features. He walked up the lines between the Admiral and General Bertrand, and enveloped as he was in his surtout, I could see little, but the occasional gleam of a diamond star, which he wore on his heart. The whole population of St. Helena had crowded to behold him, and one could hardly have believed that it contained so many inhabitants. The pressure became so great that it was with difficulty way could be made for him, and the sentries were at last ordered to stand with fixed bayonets at the entrance from the lines to the town, to prevent the multitude from pouring in. Napoleon was excessively provoked at the eagerness of the crowd to get a peep at him, more particularly as he was received in silence though with respect. I heard him afterwards say how much he had been annoyed at being followed and stared at ‘comme une bête feroçe’ [like a wild beast]. (8)

Napoleon did not like the Porteous house, in which the Duke of Wellington had stayed on an earlier voyage from India (the building was destroyed by a fire in 1862).

It was extremely clean. It was however not practical, because of its smallness and its position, and did not allow the Emperor to move about inside without being seen by passersby, nor to go out without finding himself suddenly in contact with the inhabitants of the few nearby houses making up what was called the town. (9)

On October 18, Napoleon went with Admiral Cockburn to examine Longwood House, which had been selected as his long-term residence. He was not particularly enchanted with it. In any case, the house needed to be renovated and enlarged before it could accommodate Napoleon and his retinue. On the way there, he noticed a small house that struck him as charming. This was the Briars, home of Betsy Balcombe and her family. Napoleon stopped there on his return, and asked if he could stay there instead of returning to Jamestown. The Balcombes graciously agreed, so Napoleon lived in a pavilion at the Briars until December 10, 1815, when he moved to Longwood. He remained there until his death on May 5, 1821. If you’re curious about what might have happened if Napoleon had escaped from St. Helena, read Napoleon in America.

Napoleon was excessively provoked at the eagerness of the crowd to get a peep at him, more particularly as he was received in silence though with respect.