New Year’s Day was a more important festival than Christmas in 19th century France. Families gathered, friends visited and gifts were exchanged (see New Year’s Day in Paris in the 1800s). It was thanks to Napoleon that January 1st was celebrated in France. The New Year’s celebrations had been abandoned in 1793, when the French Republican calendar was adopted. Each Republican year started on the autumnal equinox in September, without fanfare. Napoleon’s official celebration of New Year’s Day in 1800 assured the French that the Revolution was over. 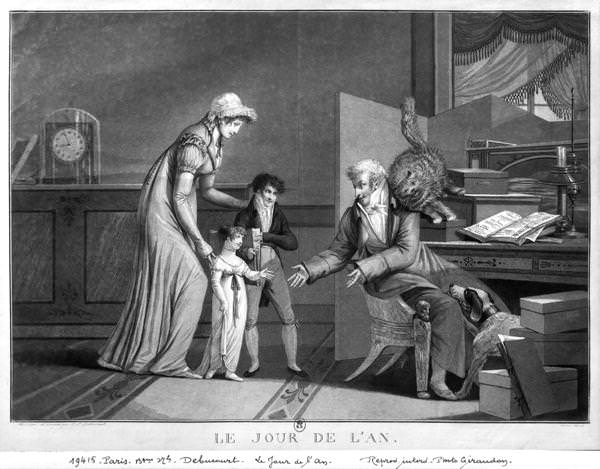 As quickly as the announcement was made, bakers and confectioners filled their windows with hastily created delicacies including, not surprisingly, ‘bonbons à la Bonaparte.’ Carriages lined the streets, and one visitor to Paris wrote that he had not seen anything in a long time quite as humorous as eight young gentlemen crammed into a carriage and then piling out along with their celebratory food and drink. Carnivals reopened, masked dances were scheduled again, and the streets were filled with activity. (1) 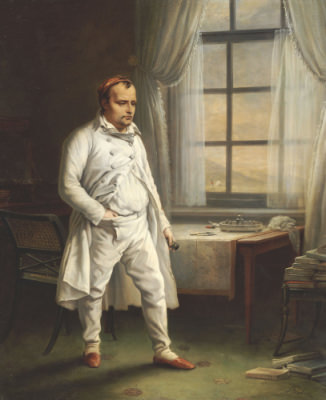 Napoleon’s first New Year’s Day in exile on St. Helena in 1816 was much less lively. According to Count de Las Cases:

On New Year’s Day we all assembled about ten o’clock in the morning, to present the compliments of the season to the Emperor. He received us in a few moments. We had more need to offer him wishes than congratulations. The Emperor wished that we should breakfast and spend the whole day together. He observed that we were but a handful in one corner of the world, and that all our consolation must be our regard for each other. We all accompanied the Emperor into the garden, where we walked about until breakfast was ready. At this moment, his fowling-pieces, which had hitherto been detained by the Admiral [Cockburn], were sent back to him. This measure, on the part of the Admiral, was only another proof of the new disposition which he had assumed towards us. The guns could be of no use to the Emperor; for the nature of the ground, and the total want of game, rendered it impossible that he could enjoy even a shadow of diversion in shooting. There were no birds except a few pigeons among the gum-trees, and these had already been killed, or forced to migrate, by the few shots that Gen. Gourgaud and my son had amused themselves in firing. (1)

Napoleon sent the Balcombe family, with whom he had stayed prior to moving to Longwood House, some presents. Their daughter Betsy recollected:

The emperor possessed among his suite the most accomplished confiseur in the world. Mr. Piron daily supplied his table with the most elaborate, and really sometimes the most elegant designs in patisserie – spun sugar, and triumphal arches, and amber palaces glittering with prismatic tints that looked as if they had been built for the queen of the fairies, after her majesty’s own designs. Napoleon often sent us in some of the prettiest of these architectural delicacies, and I shall always continue to think the bon-bons from the atelier of Monsieur Piron more exquisite than anything I ever tasted….

On New Year’s Day a deputation, consisting of the son of General Bertrand, Henri, and Tristram [Tristan], Madame Montholon’s little boy, arrived with a selection of bon-bons for us, and Napoleon observed that he had sent his Cupidons to the Graces. The bon-bons were placed in crystal baskets, covered with white satin napkins, on Sevres plates. (2)

We always made a point of riding to Longwood every New Year’s day, to wish the emperor a happy new year, and we dined with him or Madame Bertrand, though more frequently with the former. I recollect one New Year’s day I had been anticipating a present from the emperor all morning, and as the day wore on, my hopes began to wax faint, and I was beginning to make up my mind to have nothing new and pretty to feast my eyes upon, when Napoleon himself waddled into Madame Bertrand’s room, where my sister and I were seated, and perhaps rather enviously viewing some elegant souvenirs of which the emperor had made the countess a present that morning. In his hand were two beautiful Sèvres cups, exquisitely painted, one representing himself in Egypt, in the dress of a Mussulman; upon the other was delineated an Egyptian woman drawing water. ‘Here, Mesdemoiselles Betsee and Jane, are two cups for you; accept them as a mark of the friendship I entertain for you both, and for your kindness to Madame Bertrand.’ (4)

The Emperor wished that we should breakfast and spend the whole day together. He observed that we were but a handful in one corner of the world, and that all our consolation must be our regard for each other.