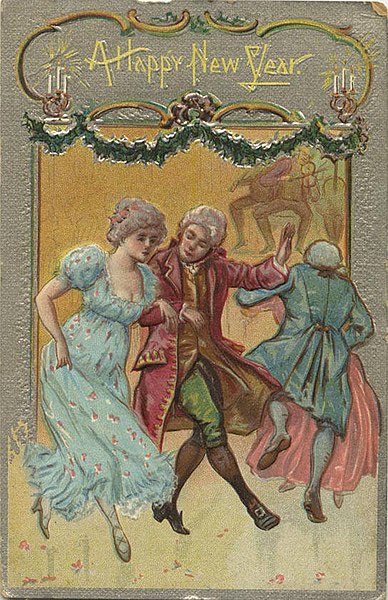 New’s Year’s Day is traditionally a time for reflecting on events of the previous year and expressing hopes for the year to come. On January 1, 1823, the editors of Galignani’s Messenger, an English-language newspaper published in Paris, conveyed their New Year wishes as follows. They undoubtedly hoped that the government of King Louis XVIII was paying attention.

The departure of the Old Year, and the dawning of a New One naturally offer an ample range for serious reflection. Another page in the Book of Experience has just closed upon us; but it is only from experience that we can acquire wisdom, and, though it may sometimes prove ‘a bitter draught,’ yet the philosopher, whether in public or in private life, will not fail to turn it to a profitable account. It affords a lesson of equal instruction to the prince and to the peasant – it points, with monitory hand, to evils encountered, and to errors committed, and acts as a friendly beacon to our future path and practice.

The feelings associated with the commencement of another year are those of festivity and friendship, the renewal of brotherhood and affection, the reciprocal forgiveness of injuries, the union of pleasure with deeds of mercy and charity, in fine, it is a time of peace and good-will to all mankind; and those sentiments cannot be too much cherished, or too often promulgated.

If we take a retrospective glance of the political events of the past year, and then turn to the actual state of Europe, with much cause of regret for the blood that has, unhappily, been shed in Greece and in Spain, we shall find, also much reason for consolation in the measures that, we trust, have been or are about to be adopted to prevent the calamities of war (which include all others) again shedding their baneful influence around us. Those, who in the march of armies and the sailing of fleets delude themselves with visions of glory and courage, would do well to reflect at what price these bubbles are purchased. In peace, human life is preserved, in war it is sacrificed; in peace, the public expenses, and consequently, the burthens of the people are diminished, in war they are greatly augmented; in peace, a free commerce stimulates to enterprise, and industry produces abundance and contentment; but in the pursuit of the most successful war a nation always retrogrades from civilization and happiness.

On one principle, indeed, war is not only a justifiable, but it may be termed a holy measure, – it is when we take up arms to defend our native soil; or again, it may be necessary, when a sufficient case is made out that our own political existence is in absolute and exigent danger of destruction, by the contaminating principles and insidious machinations of a neighbouring state; yet, only then, when every means of negotiation have failed. So far as this latter argument bears on the relative position of France and Spain, we venture to hope there is now little to apprehend, and this hope is powerfully supported by the benevolent character of the august Monarch of France, to whose paternal government, and pacific sentiments, this country is so deeply indebted for its present flourishing and improving condition. The French Ministry is too wise and too moderate to plunge the nation into hostilities, without strong and provocative grounds of necessity, and the Spanish nation, with all its Quixotism, has too much prudence and good sense to strike the first blow.

The influence of England, and the able councils by which she is directed, present another cogent argument in favour of peace; and we trust that, through her mediation, Spain will ultimately escape from the Scylla of fanaticism on one side, and the Charybdis of anarchy on the other, and found a true and permanent system of freedom, like the French, on the rock of a Constitutional Government, which will equally ensure the rights of the Sovereign and the people, and replace her in a position to command confidence and respect. (1)

On January 28, 1823, Louis XVIII announced his intention to send troops into Spain, an event that forms part of the backdrop to Napoleon in America. To find out how that turned out, see “The 1823 French Invasion of Spain.”

6 commments on “New Year Wishes from the 19th Century”

Those, who in the march of armies and the sailing of fleets delude themselves with visions of glory and courage, would do well to reflect at what price these bubbles are purchased.