Frustrated by long line-ups and unhelpful websites when doing your holiday shopping? Here are some situations you might have encountered if you went shopping 200 years ago, taken from early-19th-century newspapers. 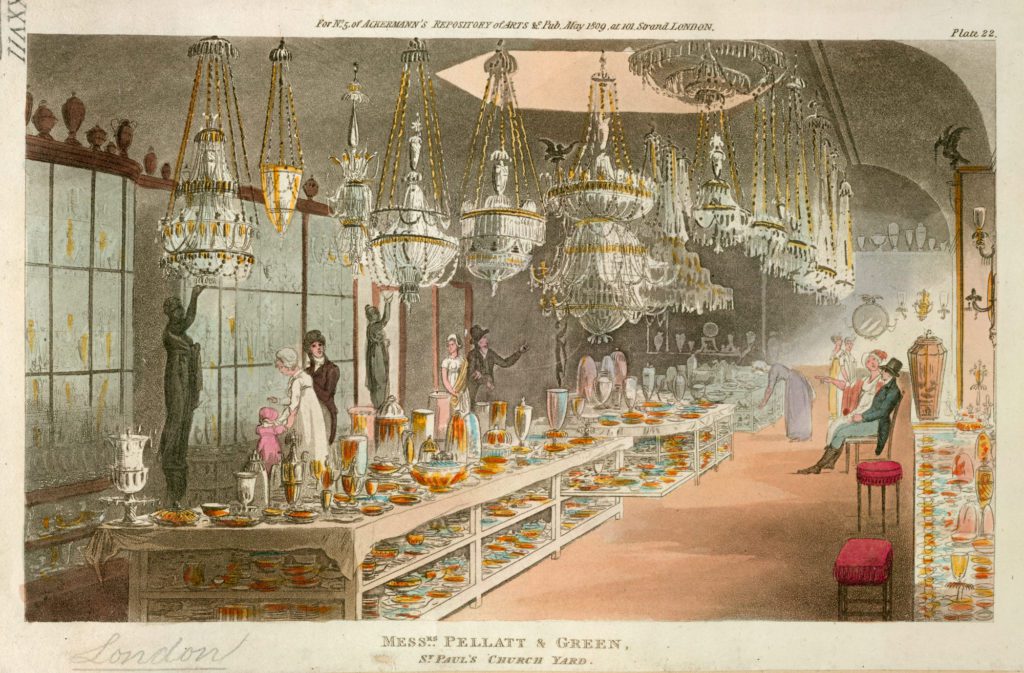 Shopping for glassware at Pellatt and Green, London, 1809

“It is distressing to think how much valuable time is lost in this world, owing to the vast multiplicity of objects amongst which one may choose, from the choice of a wife, or a profession, to that of a walking-stick, or a box of bons bons. …

“One of the most prolific sources of this perplexity is to be found in shopping, that never-ending employment of the ladies. A lady goes to purchase ribbons, or silk handkerchiefs, or a ring, perhaps: immediately the shop counter is covered with ribbons and silk handkerchiefs, of every possible variety of colour, pattern, size, and fashion. What overwhelming difficulties are presented to the purchaser! It seems almost impossible to choose. What a very sweet colour this ribbon has! – but the shade of that other one is more delicate. Don’t you think this pattern prettier than either? But look here; this is the newest. Mr– says ‘Italian green quite the fashion’; and, in short, the lady either makes the worst purchase she could have made, or purchases nothing at all, because she cannot decide.” (1) 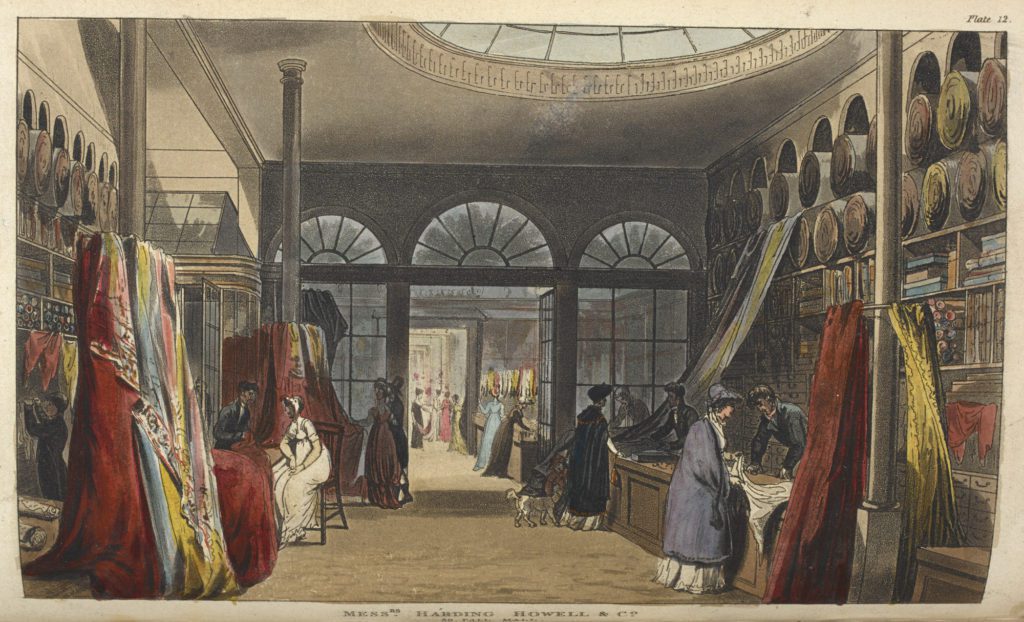 Shopping for fabric at Harding and Howell, London, 1809

“It was the ‘shopping hour,’ and [the Burlington Arcade was] thronged with numerous promenading parties. While I, like a native, employed myself in looking at the jewellery and trinkets which sparkle in the windows of the small but elegant shops in the Arcade; Taffrail had discovered a more piquante amusement in stringing the various grisettes who occupied the interior out of countenance. At length he got disdainful of out-door freaks, and entered a shop where a pretty brunette, with sparkling black eyes, was sorting trinkets almost as glittering. These the ‘gold-laced Triton,’ while I stood by wondering at his impudence, began fingering with several double entendres on the purchase of trinkets, which I am glad my modesty will not allow me to understand the wit of. However, the conversation ended in what is sometimes called ‘manual wit’ on the part of the lady, for, with her fair hands, she dealt the young spark so hearty a box on the ear as made the sparks fly visibly out of his eyes. Her tongue was by no means tongue-tied, but nearly as trenchant as her fingers; and she assured him with marvellous volubility that she was ‘meat for his betters’; she should not think, indeed not she, of half pay subs, who were little better than swindlers, presuming to think of making acquaintance with girls of honor. How were they to keep them? Poor devils, they could not keep themselves. Did he think she would wash his single shirt for him as he lay in bed? He had better go home and marry his landlady, by way of paying his debt for lodging and washing! In this way the young lady proceeded…and even the impudent lieutenant, like the first seducer, stood abashed.” (2) 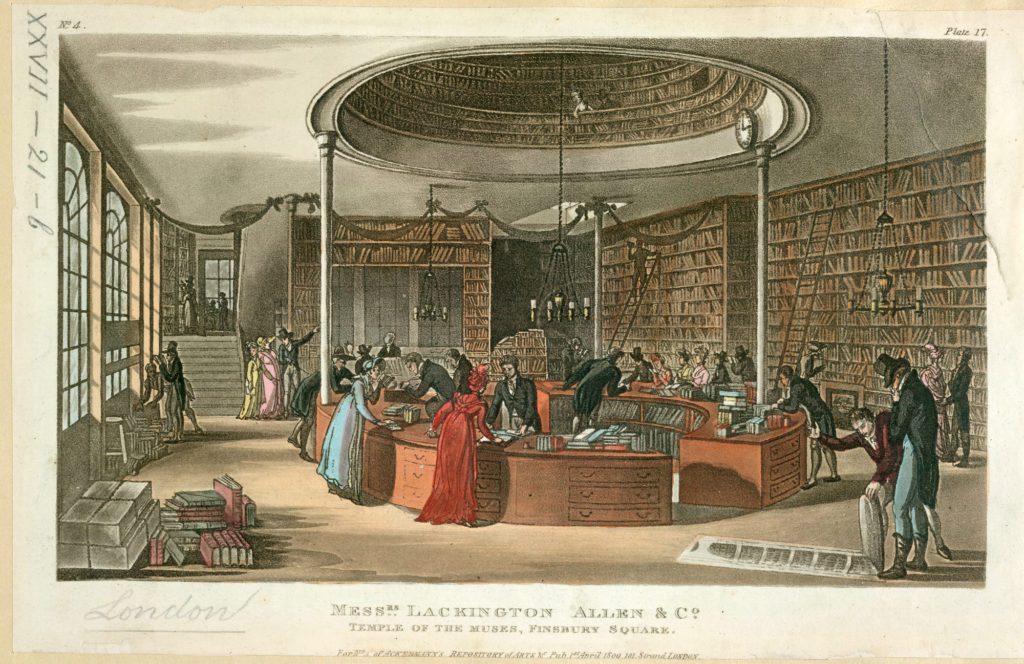 Shopping for books at Lackington, Allen and Company, London, 1809

A lady a-shopping, on Broadway once pass’d,
To perplex and annoy the young men;
Every store of dry goods she had rambled through fast,
From one to two hundred and nine, and at last
Popp’d in at two hundred and ten.

Here goods after goods were exposed to her view,
Prints, laces, and silks, at her call;
Thirty patterns she took – the Lord knows for who!
Then the strings of her huge indispensable drew,
With the prices of each mark’d on all.

‘Have you now any gloves?’ (mark the question she made);
Those for gentlemen quickly were shown;
‘Ladies’ sir, if you please,’ – and long whites were display’d;
‘Oh! the short ones,’ – short English before her were laid;
But ‘Lord! French, sir,’ next was the tune.

French kid, still unmoved, Dicky drew from a case,
Where they lay pack’d superbly together;
But he soon had to wish them well back in their place,
When for silk she exclaimed with a wonderful face,
‘Silk – Lord bless me, you see these are leather!’

Dick now stood aghast, twenty others the while
Roar’d for goods like a battling host,
The counter was heap’d to a terrible pile;
His countenance lost its accustomed smile,
And his patience now gave up the ghost.

‘Confusion!’ he stammers, with rage nearly burst,
And his face not in graces or loves;
‘Were ever poor mortals like shopkeepers curs’d?
‘Why, in Lucifer’s name, did you not ask at first
For ladies’ short white French silk gloves?’ (3) 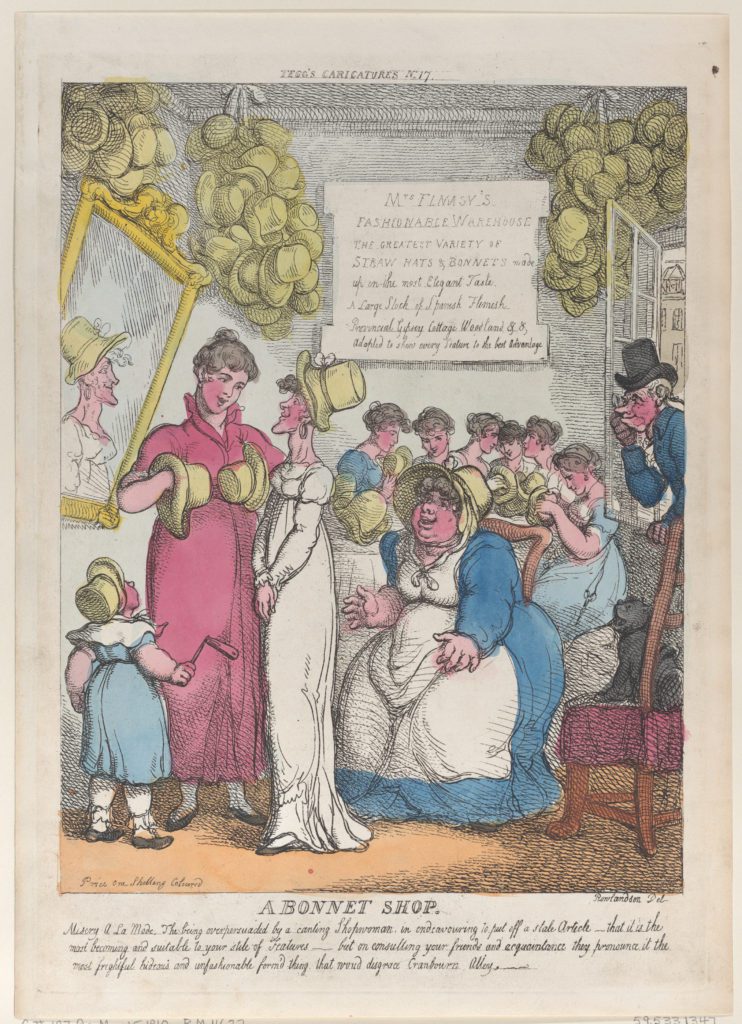 “Happy he whose tailor is a genius; thrice happy she who buys her silks and gauzes of an inspired shopman. Go to Flint’s with your wife or sister, and, instead of scolding her for delay, abusing shops and shopping, fashions and flounces, dress and dressers, tapping your stick incessantly on the ground, looking at your watch every three minutes, and interrupting by your own impatience and complaints a pending decision between a gros de Naples and Zephyreene, amuse yourself by watching the countenance and manner of the numerous shopmen and shopwomen, and endeavour to discover which among them were intended by nature to serve customers at Grafton-house. Civil and patient as the generality may be, a look of abstraction, an air of languor may be observed in their eyes and demeanour, proving that their whole soul is not engrossed by their occupation, and that necessity, not taste, has placed them at the counter.

“How different he who is acting in his proper sphere, and whose genius delights to expatiate amidst the multitudinous contents of Flint’s shelves and warehouses. He is evidently enjoying the labour which others endure. His eagerness never betrays him into confusion, nor his quickness into bustle. ‘Rapido sì, ma rapido con legge.’ He appears to take a personal interest in every lady’s choice: he would not for worlds precipitate the important decision; but affords her ample time to reflect upon the comparative merits of the articles he displays, merits which he has previously stated with great clearness and most amiable impartiality. No caprice disgusts him, no delay wearies him, every shade of every colour, every quality, every texture, is cheerfully exhibited; and when the important choice is at length made, when the lady has changed her mind till she is tired of her own indecision, and the decisive snip has precluded further vacillation, he then never fails to stamp her taste with his own humble approval. If not the prettiest, it is the newest, or cheapest, or the most durable article in the shop, and altogether he may venture to congratulate the purchaser upon her choice.

“His manner and language, too, are either respectful or familiar, as may best suit the rank or the taste of his customer. To the real gentlewoman he is all deference and humility, says little, and bows often. With her who is lower in mind than in station, and to whose coarse vanity the admiring eye of a shopman can minister, he changes his tone, speaks more familiarly, smiles often, peeps under the bonnet, and appears very much disposed to flirt, and to compliment. ‘Every one may not venture to wear green, Madam, but with your complexion.’ Apparently a fear of offending stops the flattering sentence. There is yet another class of purchasers with whom he is on still more easy terms; he calls them ‘my dear,’ hopes their sweetheart is well, advises them to trim their bonnet with love, and begs they will purchase their wedding-gown of him.

“How happy is a man of this description compared with the unfortunate wight who is tied to a business for which he has no taste, and to whom every difficulty seems formidable, every inconvenience a distress.” (4)

For more on 19-century shopping see “How did people shop in the early 1800s.” You might also enjoy:

Things People Were Thankful for 200 Years Ago

4 commments on “Shopping in the Early 19th Century”

Dick now stood aghast, twenty others the while roar’d for goods like a battling host.