If you’re doing some Christmas shopping, consider these Christmas gift ideas from the 19th century. 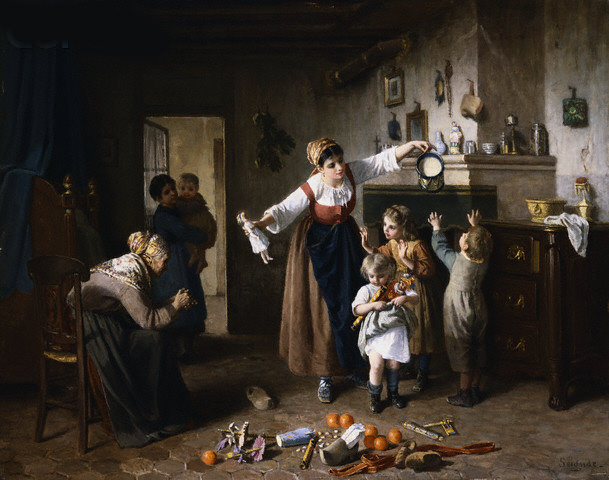 Books were popular 19th-century Christmas gifts. People especially liked the literary annuals, which were collections of essays, short fiction and poetry. The first English annual – Rudolph Ackermann’s Forget Me Not, A Christmas and New Year’s Present for 1823 – was published in November 1822. Here’s an ad for the following year’s edition.

We think a book the very best present that can be made to a young person; a piece of dress can merely be worn – a trinket but pleases the eye; a well-chosen book, if handsome at the same time, will please the eye, inform the mind, and improve the heart. This recommendation is possessed in an eminent degree by the FORGET ME NOT for 1824…. No man has done more for the light and elegant department of our literature than Mr. Ackermann. He has introduced a style of embellishment unrivalled in its tastefulness and in its beauty, and a selection of little pieces in which we have never found a single sentence to offend. Hence we would say, a priori, that a Christmas gift, coming from where this one comes, would be a tribute both to good taste and to right feeling. Some of the most tender of our poets have here done their best: we have the innocence of Bernard Barton, the tenderness of Montgomery, and the touching elegance of Henry Neele. The prose pieces, too, are exceedingly well written; and the engravings (which are numerous) are first rate. (1)

The first American annual, entitled The Atlantic Souvenir: A Christmas and New Year’s Offering for 1826, was published in December 1825.

It was customary for the wealthy to distribute gifts to the local poor. Here are some charitable Christmas gift ideas from the 1830s.

Colonel Cooper and his lady have benevolently distributed among the labourers and poor of the parishes of Corfe and Pitminster a bullock, with a proportionate quantity of bread to each individual. This bounty is of annual recurrence, and diffuses a grateful joyousness among all who partake of it.

On Wednesday, H.B. Hickam, Esq., of Thonockhall, distributed in the Town Hall, Gainsborough, his annual charity to the poor, consisting of blankets, petticoats, stocking, &c., amounting in value to 56£. He also distributed to the poor of Thonock and Blyton the same value in similar articles, which, no doubt, will swell with gratitude the hearts of many poor persons at this chilling season….

Saturday 1,440 lbs. of beef were distributed to the resident poor of Stoke-Edith, by order of E. T. Foley, Esq., M.P., with from half a peck to half a bushel of wheat to each family, 30£ was also distributed amongst the poor of Tarrington, Yarkhill, Weston Beggard, Westhide, Dormington, and Mordiford; and several of the aged poor and poor children were supplied with warm and useful clothing….

The annual Christmas gift of a fat cow and a quantity of warm clothing, given by J. Higford, Esq. to the poor residing upon his property at Abbey Dore, has been distributed to near 50 poor families.

The Rev. Braithwaite Armitage, vicar of the parish of Peterchurch, supplied all the poor of the parish, containing 1,000 souls, with beef and soup for Christmas. (2)

The Rev. G.L. Harvey, of Diseworth, has presented the poor of that village with 20 tons of coals as a Christmas gift, which were gratuitously conveyed from Pegg’s Green Colliery by several farmers. (3)

Elegant preparations for the toilet 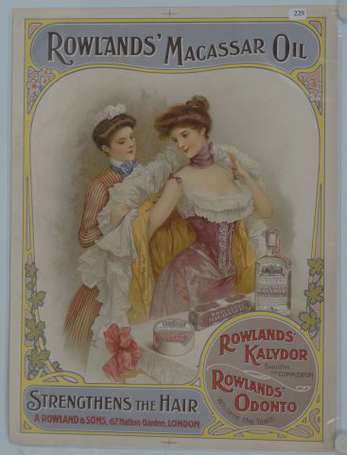 As wigs went out of style in the late 18th century, fashionable men and women needed products to help their hair look its best. London barber Alexander Rowland came up with Macassar Oil – a combination of palm oil and fragrant ylang-ylang oil, imported from Indonesia. Rowland and his sons promoted it not only as a styling aid, but also as a means of strengthening hair, restoring colour, and encouraging hair growth. The antimacassar – a small cloth placed over the back of chairs and sofas – was invented to protect upholstery from the oily deposits left by users’ heads. Rowland and Sons branched out into other products, as indicated in this article regarding Christmas gift ideas from 1840.

There are perhaps few objects which present more difficulty in the selection than the choice of that very appropriate token of affection and esteem, a Christmas Gift. The Annuals at one time offered a highly eligible mode of conveying the expression of our sentiments, and we were surrounded with a host of bijoux, gems, and souvenirs, which now have passed away and become extinct. In this difficulty we are happily relieved by the choice of the various and elegant preparations for the toilet invented by Messrs. Rowland and Sons, which constitute the most appropriate offering that can possibly tendered to the fair sex at this peculiar season. We allude to their incomparable OIL MACASSAR for the hair; their matchless KALYDOR, unrivalled for its effects on the complexion; and their invaluable ODONTO, for the teeth and gums.

Those who have experienced the torture of a rough or irritable skin will be able to appreciate the value and advantage of GUERLAIN’S Cream for Shaving, which has obtained the patronage of the most fashionable classes, both on the continents of Europe and America, and in this country. Its soothing, agreeable, and indeed luxurious qualities, are such as actually to convert pain into pleasure, and render a task, formerly one of a most repugnant nature, a duty of the most pleasing kind. (2)

Guerlain began in 1828 as a perfume store in Paris. Pierre-François Pascal Guerlain created custom fragrances with the aid of his sons.

Some young Boston gentlemen came up with these Christmas gift ideas for young ladies in 1841.

At a social hop, given at the West End a few weeks ago, the young ladies began to banter the young gentlemen in the subject of Christmas gifts, and extorted abundance of promises. On the party’s breaking up, the expected presents were again referred to, and the givers were particularly requested to remember not to forget that the gifts were to be of no perishable or useless nature, as bouquets of flowers, baskets of confectionery, or any such trash, but serviceable articles that might be kept a long time and exhibited with pleasure and pride, as memorials of a happy evening. All of which was duly and truly promised. The gentlemen agreed on unity of design, and the result was that on Christmas Eve the presents were distributed. To one lady was given a wooden bowl and chopping knife. To another, a clothes horse and ironing board. To a third, a dough board and rolling pin. To another, a dozen skewers and a larding pin. To a fifth, a pestle and mortar. To another, half a dozen patty-pans. To another, a ruffling iron. To another an egg-beater. And so on to the rest – some useful articles of kitchen furniture to each. The joke was taken in good part, and caused quite a frolic. It was proposed, in convention, that the various articles should be collected and present to the first who might be so unlucky as to get married, but the proposition was voted down by an immense majority. (5)

The New York Herald recommended these Christmas gift ideas in 1843.

This is the time to throw money into the hands of managers of theatres, museums, booksellers, &c., and make large and little children happy….
Those who wish to shoot any one can obtain their pistols at Spies’, 218 Pearl Street.
Barnett, 59 Courtlandt Street, will engrave a beautiful visiting card for you.
Any thing in the shape of jewelery can be obtained at Lyon’s, No. 80 Chatham Street.
For superior wines, &c. go to Gilbert’s, in William Street, and to Clark, Binniger & Cozzens, 56 Vesey Street.
The Alhamra will supply every one with cakes, ice creams, &c.
Lamps of all kinds can be purchased at Hooker’s 468 Broadway. They are said to be cheap.
As all parlors must be decorated, we advise every one to step into Niblo’s Garden and buy some bouquets, &c., for that purpose….
Toys! toys! toys! At 233 Centre Street. (6)

At this time of year it is customary to make presents, and almost everything is advertised in the newspapers as being peculiarly adapted for the purpose. One person recommends a book, another a cosmetic, a third a hamper of wine, a fourth a case of toys, &c.; but a decided novelty, and one of a very peculiar description, was mentioned the other day at the Mansion-house. ‘Several cases of destitution, which were picked up in the street,’ says Mr. Jopp, the relieving officer to the city of London union office in Cannon Street, ‘have been sent to me by gentlemen.’ Mr. Jopp does not appear to have known very well what to do with this Christmas gift. (7)

If someone on your list would enjoy a well-chosen book with a 19th-century flavour, check out Napoleon in America. This historical novel imagines what might have happened if Napoleon had escaped from St. Helena and wound up in the United States in 1821.

A fantastic read for fans of French history and those who like ‘what if’ kind of stories; any fan of Napoleon will want to read this, too, and imagine a world where this might have happened. Those new to speculative fiction should give this a try – it’s dangerously addictive! – Unabridged Chick

For more reviews, and to read an excerpt, click here.

8 commments on “Christmas Gift Ideas from the 19th Century”

There are perhaps few objects which present more difficulty in the selection than the choice of that very appropriate token of affection and esteem, a Christmas Gift.