In the years after Mexico won its independence from Spain in 1821, many visitors arrived from Europe and the United States hoping to establish profitable diplomatic and commercial relations with the new country. Here are glimpses of some of the Christmas celebrations they encountered. 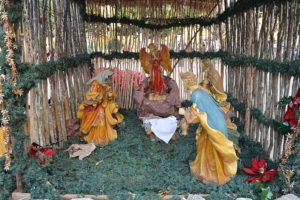 Nativity scene in the main square of Izamal, Mexico, by Alejandro Linares Garcia

British Royal Navy officer Robert Hardy (who served at the Battle of New Orleans in 1815), travelled to Mexico on behalf of the General Pearl and Coral Fishery Association of London. He spent Christmas of 1825 in Guadalajara.

The Portales (colonnades), which are much better than those of Mexico [City], and infinitely more numerous, are all well lighted up with candles, surrounded by coloured-paper shades, standing on little tables, which display a great assortment of sweetmeats and fruits. The ladies and gentlemen, too, walk about finely dressed under the Portale and convert it into a fashionable promenade. From seven till ten, there is perhaps not a single family in the whole town which has not taken a few turns, in their gayest dresses, to witness the sweetmeat exhibition; to see and to be seen! It may be well to give the traveller a gentle hint with respect to the 25th of December, for everything which is borrowed on this day is never returned. It is, in short, to the Mexicans, who call it ‘la noche Buena,’ what April-fool-day is to us. Therefore, traveller, beware! It is the occasion of much frolic and amusement. (1)

Las Posadas (“the inns”) is a traditional Mexican celebration that commemorates the journey of Joseph and Mary to Bethlehem and their search for a place to stay. It is held on the nine nights preceding Christmas, from December 16 to December 24. Each night of the posadas is hosted by a different household. Frances Calderón de la Barca, the Scottish wife of the Spanish minister to Mexico, witnessed the posadas in Mexico City on Christmas Eve in 1840.

On this night all the relations and intimate friends of each family assemble in the house of the head of the clan, a real gathering, and in the present case to the number of fifty or sixty persons.

This is the last night of what is called the Posadas, a curious mixture of religion and amusement, but extremely pretty. The meaning is this: At the time that the decree went forth from Caesar Augustus, that ‘all the world shall be taxed,’ the Virgin and Joseph having come out of Bethlehem so full of people, who had arrived from all parts of the world, that they wandered about for nine days, without finding admittance in any house or tavern, and on the ninth day took shelter in a manger, where the Saviour was born. For eight days this wandering of the Holy Family to the different Posadas is represented, and seems more intended for an amusement to the children than anything serious. We went to the Marquesa’s at eight o’clock, and about nine the ceremony commenced. A lighted taper was put into the hand of each lady, and a procession was formed, two by two, which marched all through the house, the corridors and walls of which were all decorated with evergreens and lamps, the whole party singing the Litanies. K— walked with the dowager Marquesa; and a group of little children, dressed as angels, joined the procession. They wore little robes of silver or gold lama, plumes of white feathers, and a profusion of fine diamonds and pearls, in bandeaux, brooches, and necklaces, white gauze wings, and white satin shoes, embroidered in gold.

At last the procession drew up before a door, and a shower of fireworks was sent flying over our heads. I suppose to represent the descent of the angels; for a group of ladies appeared, dressed to represent the shepherds who watched their flocks by night upon the plains of Bethlehem. Then voices, supposed to be those of Mary and Joseph, struck up a hymn, in which they begged for admittance, saying that the night was cold and dark, that the wind blew hard, and that they prayed for a night’s shelter. A chorus of voices from within refused admittance. Again those without entreated shelter, and at length declared that she at the door, who thus wandered in the night, and had not where to lay her head, was the Queen of Heaven! At this name the doors were thrown wide open, and the Holy Family entered singing. The scene within was very pretty; a nacimiento [birth]. Platforms, going all around the room, were covered with moss, on which were disposed groups of wax figures, generally representing passages from different parts of the New Testament, though sometimes they begin with Adam and Eve in paradise. There was the Annunciation – the Salutation of Mary to Elizabeth – the Wise Men of the East – the Shepherds – the Flight into Egypt. There were green trees and fruit trees, and little fountains that cast up fairy columns of water, and flocks of sheep, and a little cradle in which to lay the Infant Christ. One of the angels held a waxen baby in her arms. The whole was lighted very brilliantly, and ornamented with flowers and garlands. A padre took the baby from the angel, and placed it in the cradle, and the posada was completed.

We then returned to the drawing-room – angels, shepherds, and all, and danced till supper time. The supper was a show for sweetmeats and cakes.

Today, with the exception of there being service in all the churches, Christmas is not kept in any remarkable way. We are spending this evening alone, and very quietly. (2)

Albert Gilliam, an attorney from Virginia who also practiced dentistry, was appointed US consul to San Francisco in 1843. California was then part of Mexico, and people in President John Tyler’s administration apparently did not know much about the place, because San Francisco was not a port of entry for foreign vessels and therefore had no need for a consul. When the US consul appointed to Monterey informed Secretary of State John C. Calhoun of this fact, Gilliam’s appointment was rescinded. Although Gilliam never reached California, he traveled widely across Mexico and spent Christmas in Mexico City in 1843.

[D]uring all the day of the twenty-fourth my ears were constantly saluted by the querieud a dar, or the wishing to ring of the bells, to inform the good people that the great mass was that night to be celebrated at the Cathedral. On the evening of that day I took a walk to the plaza to witness the gathering of the people at that place. Great crowds had assembled, from distances in the country, of men, women, and children, who had spread upon the pavements their fruits and goods of all kinds, intending to reside up on the spot during all the Christmas holidays. Under the corridors of the private buildings around the plaza were crowds of citizens examining their trinkets and other commodities, brought by the hucksters to markets. I observed that many were the dollars expended in worthless things, to be used as Christmas compliments. These holiday merchants had not opened their goods for a temporary residence of a few hours, but had located themselves for a day and night, as each individual had prepared him or herself with a petate, mat, upon which to slumber when wearied.

The scene was truly most confused and lively; more so than any I had ever beheld; and I, for the first time, began to think that there was some enterprise amongst the Mexicans; for it was the only sight I had discovered like business since I had been in the country….

At night, it being Christmas eve, I again visited in the plaza, in company with two of my American acquaintances. The scene was much heightened, in its interesting confusion, from that beheld during the day. The multitude of holiday merchants, who thronged the sidewalks, were now scattered all over the plaza, seated on their mats in Indian fashion, and only discoverable through the dark volumes of smoke that circled upwards from the pine torches; and as the crowd of citizen spectators passed to and fro, and the guards of soldiers, with their bright weapons gleaming through the smoke of the torch-light, marched along, the whole formed a scene more picturesque than any encampment of the kind I ever beheld.

But as the hour grew late, the interest I had before taken was diminished, by discovering that many of both sexes were intoxicated by drinking pulque, the essence of maguey, a cheap liquid, used mostly by the lazarones. …

Christmas day was also marked by many other festivities. There was during the whole day, the firing of rockets from the churches, and of cannon from before the national palace, at the plaza. In the evening, General Canalizo, the dictator, pro tem., in his coach of state, accompanied by his guards of lancers, commanded by a general officer, rode through the streets …

Having seen the big show of the Dictator, I followed the crowd to the Plaza de los Torros…. Having convinced myself that decent and respectable portions of society, embracing both sexes, visited the shows of bull-fighting; I attended the exhibition, remaining there as long as I could do so with any degree of ease or comfort. (3)

It may be well to give the traveller a gentle hint with respect to the 25th of December, for everything which is borrowed on this day is never returned.