There is no mention of Napoleon Bonaparte doing anything special for his first Christmas in exile on St. Helena. One of his companions, Count de Las Cases, wrote on December 25, 1815:

The Emperor, who had not been well the preceding evening, was still indisposed this morning, and sent word that it would be impossible for him to receive the officers of the 53rd [regiment], as he had appointed. He sent for me about the middle of the day, and we again perused some chapters of the Campaign of Italy. (1)

Napoleon nonetheless occasioned some Christmas cheer in England, judging from a seasonal recipe appearing in a London newspaper. 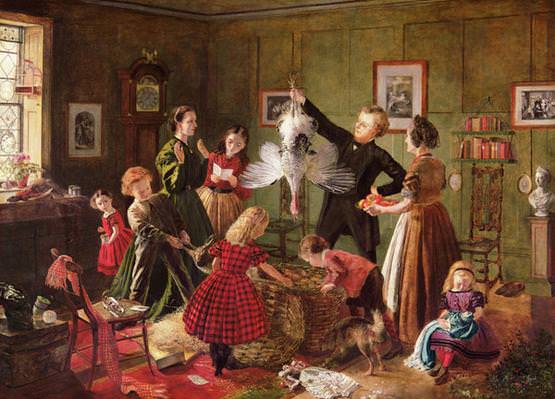 Take a St. Helena Cock past crowing, Bonypart and all, smoke him and baste him; season him with Savory, and a few Malta pickles; of French plums (say Orleans) take as many as you can lay hands on; take from the Chamber of Pears (or Peers) about a dozen that are not sound, hang them up in the open air for a short time, then take them down and cut them in pieces; add a little sour Rhenish wine; and if the whole becomes too tart, sweeten it with a French Berry – be sure to take the Berry out again; let the crust be made of the flower of the late French army; expose it to a hot fire, and it will be a dish fit to set before the King. (2) Le pâté indigeste, a caricature of the 1815 Congress of Vienna. The Duke of Wellington, the King of Prussia, and the Emperors of Russia and Austria sit around the table. Napoleon is on it. Louis XVIII is under it.

The same newspaper offered the following Christmas questions, submitted by a reader.

Mr. Editor – Having been for several years a very prying and inquisitive observer of every thing out of the common course of things which this great city presents, I have been enabled to divine or to discover reasonable explanations of many things which less curious persons are contented to receive as they pass for matters quite simple, although very difficult to be accounted for; or if the difficulty occurs to them, to leave it unenlightened by investigation or inquiry. … [B]eing desirous to inspire others with the same ingenious and useful fancy that animates and directs my researches, and willing, at the same time, to receive information even from the moderately-gifted in point of intellect, I beg leave to submit the following questions, which may be put in the round of Christmas puzzles, in any society that may be disposed to admit them….

Q.1. Why do the hackney-coachmen, exclusively of all the inhabitants of London, wear wooden-soled shoes, sitting as they always do, high and dry, upon their coach-boxes, and never having occasion to walk in the mud, against which these clumsy timber foot-cases seem designed to be preservatives?

Q.2. Why is there always a clock in a cake-shop, and in no other except those of clock and watch-makers, pastry being of all commodities the least accustomed and the most unfit to be consumed against time?

Q.3. Why is Brawn sold by the fishmongers, and by them alone, being made of a material which, to use SHAKESPEAR’s language, although ‘very antient’ is, of all others in the world, perhaps the most ‘un-fishlike?’

When these important points are satisfactorily elucidated, you may receive some more to be submitted to the same illuminating tribunals. – A LONDONER (3)

2 commments on “Bonypart Pie and Questions for Christmas”

Take a St. Helena Cock past crowing, Bonypart and all, smoke him and baste him; season him with Savory, and a few Malta pickles.