Napoleon Bonaparte celebrated his 46th birthday – August 15, 1815 – as a prisoner on a Royal Navy ship off the northwest coast of Spain. How did he spend the day? 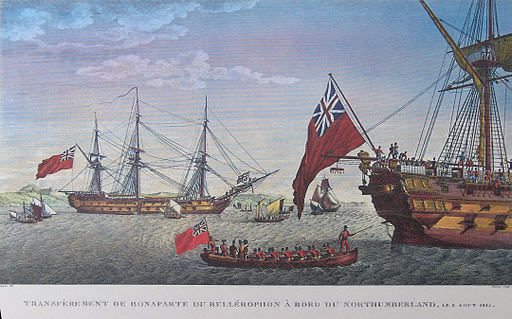 After losing the Battle of Waterloo, abdicating from the French throne, and giving himself up to England (see my post about why Napoleon didn’t escape to the United States), Napoleon was taken to Plymouth Sound on the British frigate Bellerophon. On August 7, 1815 he was transferred to HMS Northumberland, a 74-gun ship of the line, and placed under the supervision of Rear Admiral George Cockburn. The ship set sail for the remote South Atlantic island of St. Helena on August 8.

One of Napoleon’s companions, Count de Las Cases, reported on the voyage.

[August] 11th-14th – Our course was shaped to cross the Bay of Biscay, and double Cape Finisterre. The wind was fair, though light; and the heat excessive: nothing could be more monotonous than the time we now passed. The Emperor breakfasted in his own cabin at irregular hours; we took our breakfast at ten o’clock, in the French style, while the English continued to breakfast in their own way at eight.

The Emperor sent for one of us every morning to know what was going on, the distance run, the state of the wind, and other particulars connected with our progress. He read a great deal, dressed towards four o’clock, and then came into the general cabin; here he played at chess with one of the party: at five o’clock the Admiral, having come out of his cabin a few minutes before, announced that dinner was on the table.

[August] 15th – We asked permission to be admitted into the Emperor’s presence this morning, and all entered his cabin at the same time. He was not aware of the cause of this visit: – it was his birthday, which seemed to have altogether escaped his recollection. We had been in the habit of seeing him on that anniversary, on a much larger stage and in the midst of his power, but never were our vows more sincere, or our hearts more full of attachment, than on the present occasion.

The days now exactly resembled each other: at night we constantly played at vingt-et-un; the Admiral and some of his officers being occasionally of the party. The Emperor used to retire after losing, according to custom, his ten or twelve Napoleons; this happened to him daily, because he would persist in leaving his stake on the table, until it had produced a considerable number. To-day he had gained from eighty to a hundred. The Admiral dealt the cards: the Emperor still wished to leave his winnings, in order to see how far he could reach; but thought he could perceive it would be quite as agreeable to the Admiral if he stopped where he was. The Emperor had won sixteen times, and might have won more than sixty thousand Napoleons. While all present were expatiating on his being thus singularly favoured by fortune, an English officer observed that it was the anniversary of his birthday. (1)

On August 15, these gentlemen came individually to wish the Emperor a happy birthday; the Emperor had forgotten about it, and was quite touched by this attention which, without demoralizing him, took him back to happier days. He spoke touching words of kindness to one of them. I am told by Saint-Denis that the admiral, informed of the circumstances, that evening at dinner proposed a toast to the health of the Emperor, in which all the Englishmen joined. That same evening, it was remarked that he constantly won at gambling, and had he wanted to follow up on his luck, the sum could have been considerable. ‘My luck was such,’ he said to me on returning, ‘that my winnings reached 80 napoleons.’ The Emperor had played twenty-one. This luck seemed to me all the more extraordinary, as every day I was obliged to replace in his purse the few napoleons he had lost while gambling the previous night. (2) 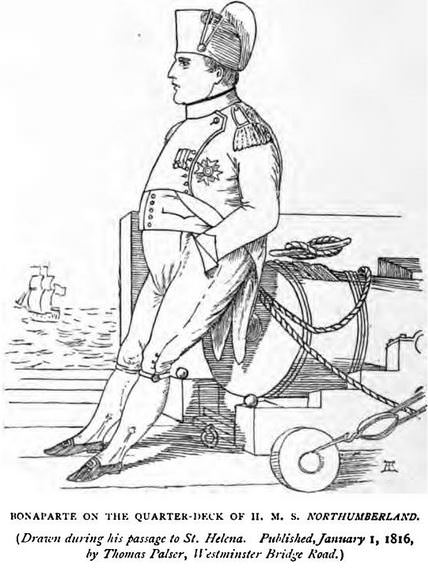 Napoleon Bonaparte on the quarter-deck of HMS Northumberland

August 15th. We still had light winds and fine weather, with less swell than usual. This may in some measure account for the greater sociability of General Buonaparte.

It being his birthday, I made him my compliments upon it, and drank his health, which civility he seemed to appreciate.

After dinner I walked with him on deck, and had considerable conversation with him. In the course of it, I asked him whether he really had intended to invade England, when he made the demonstration at Boulogne.

He told me he had most perfectly and decidedly made up his mind to it…. He observed that he had fully believed that his fleet would have deceived ours, by the route and manoeuvres which he directed his officers to make; and that they would have been enabled, by these means, to get off Boulogne, so as to have had a decided superiority in the Channel, long enough to insure him a safe passage. He said that every thing was so arranged, and prepared, that it would only have required twenty-four hours after arriving at the spot fixed upon. He said he had 200,000 men for this service, out of which 6,000 cavalry would have been landed, with horses and every thing else, completely fit for acting the moment they were on shore….

He told me the exact point of debarkation had not been fixed by him, as he considered it not material, and to be determined, therefore, by the winds, and the circumstances of the moment; but that he had intended to have landed as near to Chatham as he conveniently could, in order to have secured our store in that place at once, and then to have pushed on to London by that road….

The General observed, however, that he had relinquished the project, from the moment he found that his fleets had failed him. Having then turned his whole attention to his new enemies on the Continent, his forces collected at Boulogne enabled him to make the sudden movement which proved fatal to General Mack, and gave him all the advantages which followed….

His spirits, throughout this day, have appeared considerably better than for some time past. He won at vingt-et-un, and his good fortune seemed to gratify him the more, as it was his birthday. He did not go to his bedroom this evening until past eleven o’clock.

That was Napoleon’s last birthday in the northern hemisphere. He arrived at St. Helena on October 15, 1815 and died there on May 5, 1821. If you’re curious about how Napoleon might have celebrated a birthday if he’d been able to escape from the island, read Napoleon in America.

The Birth of Napoleon Bonaparte

8 commments on “Napoleon’s Birthday at Sea”

On August 15, these gentlemen came individually to wish the Emperor a happy birthday; the Emperor had forgotten about it, and was quite touched by this attention which, without demoralizing him, took him back to happier days.